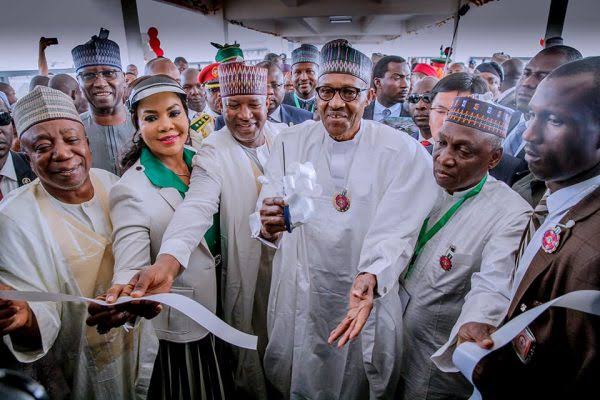 Nigeria’s President Muhammadu Buhari has commissioned a new Terminal at the Nnamdi Azikiwe International Airport (NAIA), Abuja, reiterating the commitment of his administration to making policies that will sustain the development of Nigeria’s infrastructure. The new terminal designed to handle 15 million passengers in a year is one of the four new terminal projects funded by China-Exim bank and the debt management office. Recall that President Buhari also commissioned a new terminal at the Port Harcout International Airport in October 2018.

The President who spoke at the commissioning of the new terminal in Abuja enthuses: “With the commissioning of this Terminal, Nigeria is moving towards achieving and meeting global aviation standards in facilitation, passenger processing and service delivery in tandem with international best practices.” The President also emphasizes that his Administration recognises aviation as a catalyst for economic growth and as such will continue to encourage and support the actualization of projects that will place Nigerian Airports amongst the best in the world.

Senator Hadi Sirika, Minister of State for Aviation, who also spoke at the event says: “NAIA is very strategic to Nigeria not only because it is the gateway to the nation’s capital but also because it is the second busiest airport in the country and the fastest growing in passenger traffic in West and Central Africa, with an average growth rate of 8%, where the world average growth is 5.8%.”

Engr. Saleh Dunoma Managing Director of Federal Airports Authority of Nigeria (FAAN), agrees with the Minister. Mr. Dunoma says: “Work is in progress in the remaining terminal which is in Lagos and Kano,” adding that China Civil Engineering and Construction Company (CCECC), the Contractor of the projects is at work on the sites. He also hints that the new terminals would provide employment opportunities.