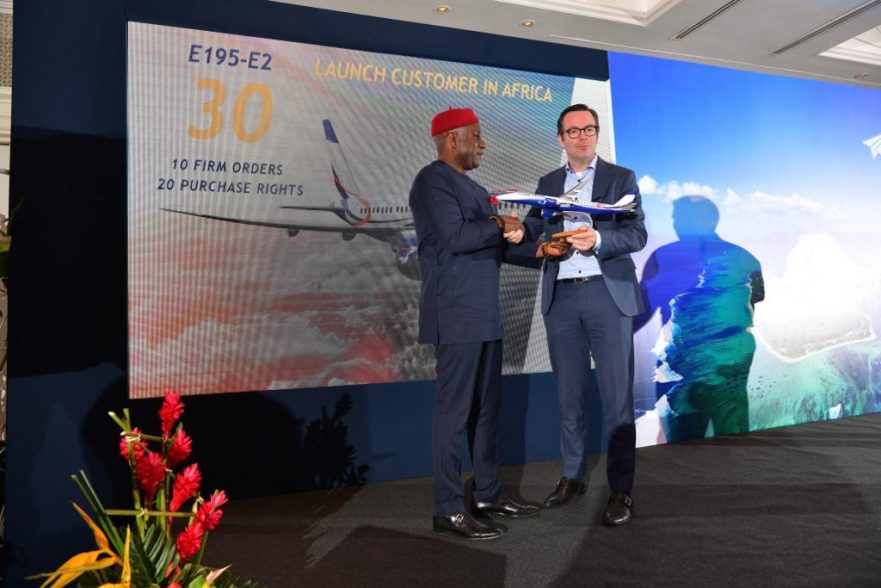 Embraer has signed a firm order for 10 E195-E2 jets with Air Peace, one of Nigeria’s airlines. The order was announced today, during the Embraer’s Africa Airline Business Seminar, in Mauritius.

With this order, Air Peace will become the first E-Jets E2 operator in Africa. The contract includes purchase rights for a further 20 E195-E2. With all purchase rights being exercised, the contract has a value of USD 2.12 billion, based on current list prices. The order will be included in Embraer’s 2019 second-quarter backlog.

Air Peace has grown rapidly since it commenced flight operations in 2014. The airline intends to address the significant untapped demand in the African market with the E195-E2, the newest, most efficient, and most comfortable aircraft in the segment.

Mr. Allen Onyema, Air Peace Chairman/CEO, says: “Embraer’s new E195-E2 presents us with a marvel of economic performance. It’s also great that we will be the first E2 operator on the African continent. We already have the ERJ145s in our fleet, so we understand the high standards of Embraer products.”

Mr. Arjan Meijer, Chief Commercial Officer, Embraer Commercial Aviation, comments: “Air Peace embodies the kind of pioneering spirit that Embraer loves. The airline was established to bring highly skilled work opportunities to the people of Nigeria and to boost connectivity, which in turn significantly contributed to the economy in the region. Air Peace has delivered successfully on both aims, and has become a fast growing successful airline. It’s great to now have them onboard the E2 as well.”

Meijer continues: “The market in Africa presents significant opportunities for airlines to deliver the connectivity that the whole continent needs. Aircraft however must be right-sized to develop those routes profitably; more than 90% of intra-African flights depart with fewer than 150 passengers onboard. And more than 70% of markets are served with less than one flight per day.”