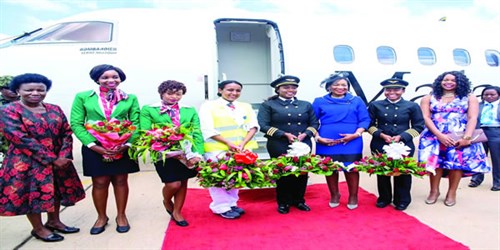 Malawi Airlines says it has operated the airline’s maiden all-women operated and supported flight, aimed at encouraging women to pursue careers in aviation.

The airline reveals that the flight which was operated using the Bombardier Q-400 was flown from Blantyre to Dar es Salaam and back, with Capt. Yolanda Ndala Kaunda and FO Lusekelo Mwenifumbo, in command of the flight deck and flight technician, Saba Solomon, certifying take offs. The flight cabin, security, check-in and fire fighting were also operated by women. The Control Towers at Kamuzu International Airport (KIA) was not left out as it was controlled by three women, completing the set of the all-women crew.

The First Lady of the Republic of Malawi, Madame Dr. Gertrude Mutharika, who witnessed the historic flight, states that the all-women flight was a symbol that Malawi was on the right track towards women empowerment. She says: “Let me emphatically add that this first ever All-Women Flight has confirmed that sky is no longer the limit for women. Today, women have come to demolish all boundaries that kept us confined in certain narrow spaces for far too long.”

Malawi Airlines, Chief Executive Officer, Ahadu Simachew, says the ‘special flight’ was organized to showcase that women were as capable of handling challenging endeavours, such as flying,  which are mostly dominated by men.