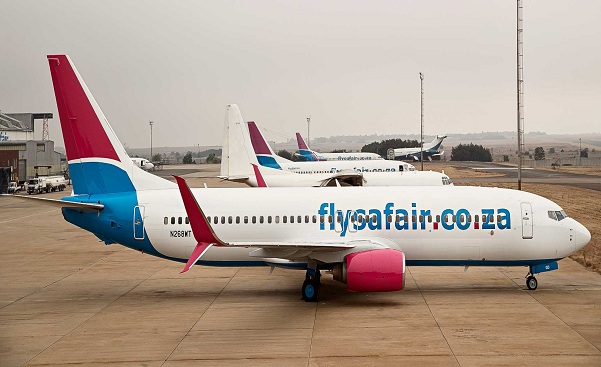 FlySafair has announced the arrival of the newest addition to its fleet. The Boeing 737-800 Next-Generation aircraft, touched down at OR Tambo International Airport recently, with a second aircraft due to arrive later in October 2020.

The airline has been increasing its capacity since restarting operations in June this year, and these new arrivals will allow for further expansion helping to increase capacity as demand for local travel grows.

Kirby Gordon, CMO of FlySafair, said :“Now’s a great time to look to expand your fleet, if you’re in a position to do so, because with the industry being where it is, there are plenty of aircraft up for grabs at very reasonable prices.”

According to FlySafair, a careful resource planning has allowed it to recommence operations, while also ensuring the safety of its employees and customers during the COVID-19 pandemic. FlySafair stated that the circumspect approach has always stood it in good stead as a bullish competitor in the local market.

“It was important to us that we get our operations going as soon as it was feasible to do so, especially as it was clear that there was not going to be any state support for our sector. We’re also in the fortunate position where we perform all our own maintenance, so there’s been no reliance on possibly unstable third parties in that regard,” Mr. Gordon noted.

FlySafair’s new aircraft, already painted in the company colours, will begin operations as soon as registration requirements are processed by the South African Civil Aviation Authority.

“This new addition will help to increase capacity and hopefully push fares down a bit”, says Gordon who added, “We’ve been holding the mantle for a while now and it’s important that we get more capacity into the market through our own expansion, and through the return of competitors. Our economy needs lots of affordable air access as a catalyst for recovery,” Mr. Gordon concluded.