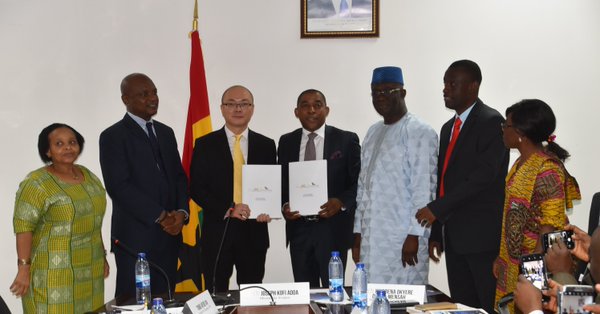 South African Airways (SAA) has enhanced connectivity for its customers travelling to, from and beyond the West Africa region following the successful completion of a Memorandum of Understanding (MOU) with Africa World Airlines (AWA), the airline’s Ghanaian partners.

The CEOs of SAA and AWA, Mr. Vuyani Jarana and Mr. John Quan, respectively, officially signed the MOU at the Ghana Ministry of Aviation in Accra, Ghana, recently.

Hon. Joseph Kofi Adda, the Ghana Minister of Aviation, officiated at the event.

The MOU allows the two airlines to enhance their relationship through synergies that include code sharing, franchising and any other related projects.

Mr. Vuyani Jarana, SAA CEO, says. “As part of our turnaround strategy, we are constantly looking at ways of improving our customers’ travel experiences. This agreement gives our customers seamless connections from Johannesburg into more destinations in Ghana and other West African destinations. Our aim is to improve air travel connections on the continent through partnerships and this agreement with AWA goes a long way towards improving intra-African travel.”

Mr. John Quan, AWA CEO, says: “This agreement with South African Airways will help consolidate Africa World Airlines’ position as one of the leading airlines in West Africa. We are excited by the potential that this African partnership can deliver, and are confident that it will be a win-win relationship for both sides.”

SAA and Africa World Airlines formed a relationship in 2015, which resulted in the commencement of the Accra to Washington Dulles flights. Over the coming months the interline agreement will evolve into a code share agreement.

Caption: Mr. John Quan, CEO, AWA (third left) with Mr. Vuyani Jarana, CEO, SAA (middle) and others at the signing of the Memorandum of Understanding (MOU) to deepen strategic partnership between the airlines in Accra, recently