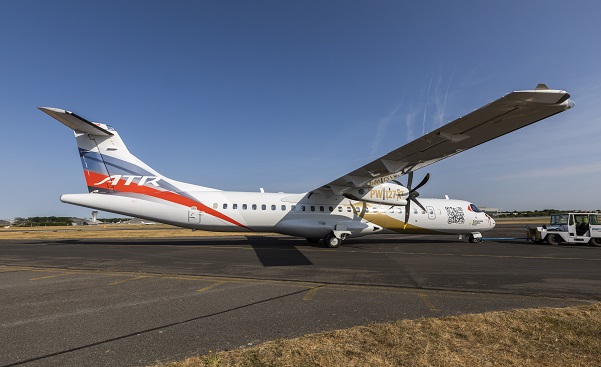 ATR said there will be demand for at least 2,450 turboprop aircraft over the next 20 years meeting the increasing demand for regional connections and lower emission air transport. This is according to the company’s first global market forecast since 2018, presented today at the Farnborough Airshow.

The report, which covers the 2022 to 2041 period, predicts a strong return to business after a challenging two years for the aviation industry.

Fabrice Vautier, SVP Commercial at ATR says: “The forecast demonstrates that essential connectivity is needed both for emerging and mature markets now and in the future.  The biggest driver of demand is airlines modernizing their fleets to meet the highest environmental standards while making air transport accessible to all.  Replacements will account for seven out of ten new aircraft, the remainder will be deployed to enhance regional mobility and connectivity through new routes.”

Today turboprops make up around 40 percent of the regional passenger fleet. The forecast predicts that the global fleet of turboprop passenger aircraft with at least 30 seats will rise from 1950  in 2022 to 2660 in 2041 – an increase of around 36 percent. The biggest rise is in Asia Pacific, China, and Latin America.

The report also identifies the growing role of air cargo. Freighters have come to play an essential role in supporting regional communities, partly due to the acceleration of the digital economy and e-commerce.

The forecast highlights that with turboprops making up to 94 percent of the regional freighter fleet, this presents an important area of opportunity for the industry. The global fleet of turboprop freighters is predicted to rise from 380 in 2021 to 550 in 2041 – an increase of 45 percent.

South East Asia, China, and Latin America have been identified as areas of increased regional demand, as customer expectations for faster delivery expand beyond key primary gateways in each region.

An additional factor driving future demand for turboprops: is their ability to address the changing regulatory environment created by climate challenges. Increasing fuel prices, growing carbon taxation, as well as greater passenger demand for lower emission travel all, mean that the aviation industry is naturally favoring low-carbon emitting aircraft such as turboprops. Even today, if all regional jets in Europe were replaced by turboprops, the reduction of CO2 emissions would be equivalent to the amount of CO2 removed by a forest of around 5000 km2, more or less the size of the Balearic Islands!

The report concludes that new disruptive technologies, likely to be adopted from 2030 onwards, will further bring turboprops to the forefront of the aviation industry, helping play a vital role in connecting people and businesses and driving economic growth around the globe.