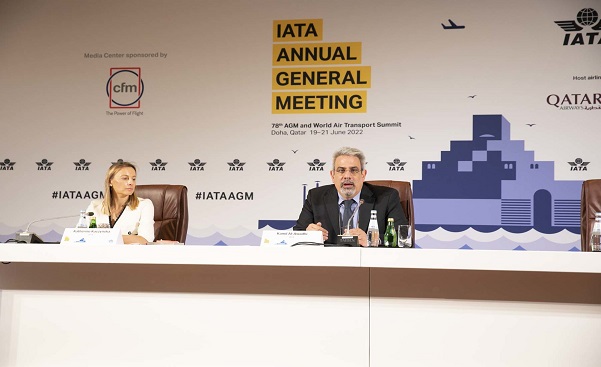 The 78th Annual General Assembly of the International Air Transport Association (IATA) kicked off in Doha, Qatar June 19, with a fervent call by Mr. Kamil Alawadhi, IATA Regional Vice President for Africa and Middle East (AME), for the African States to expedite the release of airlines’ funds still trapped in their jurisdictions.

Mr. Alawadhi lamented that “blocked funds remain an issue in Africa,” as he revealed that Nigeria has the highest amount of blocked funds at $450m, calling on the country to take action to address this challenge. Nigeria has many airlines flying to it from within and outside Africa.

“Nigeria alone is holding back $450 million. It is the most amount blocked by any single African country, and the amount is rising every week,” Mr. Alawadhi lamented.

He added that the top countries in Africa with blocked funds as of May 2022 also include Zimbabwe with $100m blocked funds, Algeria with $96m blocked funds, as well as Eritrea which has blocked $79m, and Ethiopia trapping $75m of airlines’ funds.

Whereas globally, there is a total of $1.6 billion in funds blocked by 20 countries as of April, he noted that 67% of blocked funds are trapped in 12 countries in Africa.

Mr. Alawadhi explained that “cash flow is key for airlines’ business sustainability,” adding that “when airlines are unable to repatriate their funds, it severely impedes their operations and limits the number of markets they can serve.”

The challenge of blocked funds is a strong discouragement for foreign airlines doing business in Africa. The disturbing issue of blocked funds has been adduced to a number of reasons including mismanagement and other economic challenges.

Similarly, Mr. Alawadhi further emphasized the need to enhance air connectivity in Africa. According to him, “a financially viable air transport sector supports jobs and must be a driving force for Africa and the Middle East economic recovery from COVID-19.”

He said reduced air connectivity erodes a country’s competitiveness, and diminishes investor confidence, as he called on governments “to prioritize aviation in the access to foreign exchange on the basis that air connectivity is a vital key economic catalyst for the country.”

Alawadhi, who commended safety improvements in Africa, noted that maintaining safety improvements in Africa achieved pre-pandemic is essential during restart. He stressed the importance of the IATA Operational Safety Audit (IOSA) to safety performance, as well as the need to uphold the Abuja Safety Declaration of 2012 adopted by the African States, which has boosted safety in Africa so far.

“In 2021, Airlines based in sub-Saharan Africa experienced four accidents however they were all with turboprop aircraft, and none of the operators was on the IOSA registry. There were no jet hull loss accidents in 2021 or 2020,” he highlighted.

As aviation industry activities resume after two years of COVID-19 challenges, the industry must build back safer, he submitted, as he called for effectiveness in driving harmonized regional agenda for air transport which would enable the Middle East and Africa to address crises such as the covid-19 as well as taxes and charges.

He also called for a stronger regional regulatory body and better coordination and harmonization in the Middle East region to drive the aviation agenda and benefits to the region.

For Africa, he explained that “harmonization is institutionalized through the AU and AFCAC,” adding that both have demonstrated effective regional coordination and harmonization in many areas, for example, safety, security, covid response, and SAATM, the latter having a clear framework for the liberalization of air transport despite the challenge we are facing now with implementation.”

Mr. Alawadhy called on governments to work closely with industry and with each other to drive a harmonized agenda for air transport in the region.