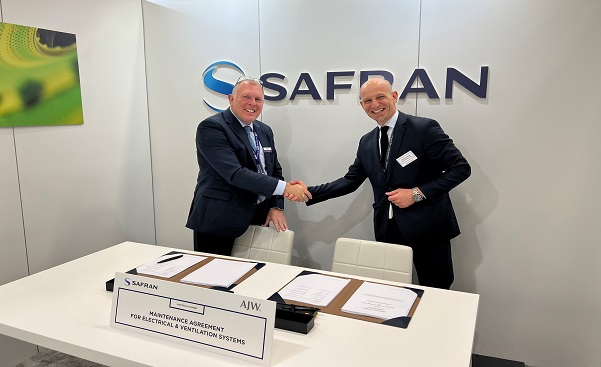 According to Safran, this contract covers more than 350 Airbus A320 and A330, including AJW Group’s flagship customers’ fleets. This is an exclusive contract for a period of five years and will support around 50 Auxiliary Power Units generators (APUs) and more than 100 ventilation systems per year.

Safran Electrical & Power will repair its Auxiliary Power Units generators (APUs) as well as all the electrical contactors, whereas Safran Ventilation Systems will maintain the ventilation systems (avionics fans, skin air valves, brake cooling fans). Once repaired, the equipment will be shipped to AJW’s headquarters in the UK. Safran as the Original Equipment Manufacturer (OEM) will provide state-of-the-art repair improving drastically the reliability of the components.

Vincenzo Guerriero, VP of Customer Services and Support at Safran Electrical & Power and Safran Ventilation Systems said: “We are delighted to strengthen our partnership on MRO with AJW Group – a client with which we have had a strong relationship for many years. Such achievement and such renewal of cooperation is the result of a constant dedication for delivering the best possible service, the highest level of quality, and the expected level of performance of an aviation equipment manufacturer.”

Barry Swift, Senior Vice President of Operations at AJW Group said: “We are pleased to be collaborating with Safran on the A320 and A330 electrical generators, contactors, and ventilation systems. The contract with Safran exemplifies AJW’s strategy and commitment to providing our global customers with seamless supply chain management, the highest quality of component repairs, and impressive turnaround times to meet the demands that operators need to maximize their operations.”

Find Safran at MRO Americas, from April 26 to 28 April 2022: Halls C-E – Stand #6619 and AJW Group at Stand #1400 Safran is an international high-technology group, operating in aviation (propulsion, equipment, and interiors), defense and space markets. Its core purpose is to contribute to a safer, more sustainable world, where air transport is more environmentally friendly, comfortable, and accessible.