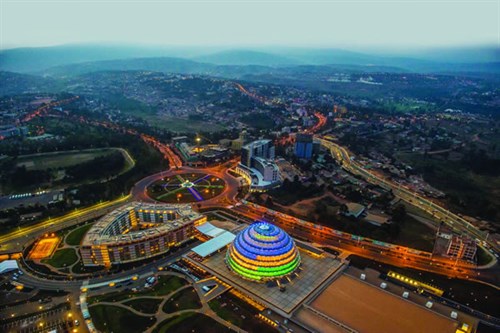 The major challenges limiting passenger, cargo and aircraft movement in Africa are the pervasive market restrictions imposed by African States due seemingly to unfounded fear of domination by other States and their airlines. On-going efforts by African governments to achieve the Single African Air Transport Market (SAATM) in 2017/2018, and efforts by aviation industry and partners to harmonize civil aviation policies and air traffic management infrastructure are expected to usher in continent-wide liberalization and open skies. This will bring tremendous benefits in Africa, including substantial air traffic growth in the continent.

“I am convinced that the African Union, which is also interested in the civil aviation sector, thanks to a greater dynamism of the AFCAC its technical body in this field and ICAO, will have to play an important role in the process of constructing this African Single Sky,” says Mr. Mohammed Moussa, DG, ASECNA.

Africa’s gross domestic product (GDP) is projected to grow at about 3.5 percent, and its aviation industry is forecast to grow at about 4.5 percent over the next two decades, and the top ten fastest-growing markets in percentage terms will be in Africa.

Recent industry report by the International Air Transport Association (IATA) indicates that “African airlines continued to enjoy good demand, with traffic up 6.0% compared to March 2016. Capacity rose 2.4%, and load factor strengthened 2.3 percentage points to 68.2%. Notwithstanding fragility in the region’s biggest economies (Nigeria and South Africa), traffic growth has strengthened in recent months with RPKs growing at an annualized pace of nearly 10% since mid-2016. This pick-up reflects a combination of faster growth on the key market to and from Europe, and also between Africa and the Middle East.”

Based on a recent study of 12 African States, IATA believes that “liberalization of air services across the 12 African nations would create thousands of new jobs and boost GDP by $1.3 billion. In the same vein, some 14,600 direct jobs would be generated in the aviation sector. If the indirect employment gains are included, the total reaches 23,400 jobs, ranging from 1,500 jobs in Ethiopia to 5,400 in South Africa.

“Employment would also be boosted by an additional 1.23 million tourism visits among the 12 countries, spending $1.3 billion, an increase of 4.4% on total international tourism spend in 2013. Some 40,000 direct jobs would be created in the tourism sector and a further 35,100 jobs in connected industries,” IATA also adds.

This expected increase in air traffic will further be complemented by renewed efforts to build-up aviation and general economic infrastructure in various States in Africa. What is more interesting is that while the rising tourism, investment in infrastructure, agriculture and industrialization generally in Africa now attract increased foreign traffic into the continent, emerging business opportunities in several fast-growing economies in Africa will continue to drive increased intra-Africa air traffic between existing and dozens of new city-pairs.

Each of these markets is expected to grow by more than 8% each year on average over the next 20 years, doubling in size each decade.

About 3.7 billion passengers were carried by air globally in 2016, more than half of the world’s tourists crossing international borders yearly move by air. Tourism growth in Africa remarkably adds to air traffic on the continent and there is now stronger focus on Africa’s tourism development. “For millions of Africans, tourism is a lifeline – its potential for driving transformative and inclusive growth must be harnessed,” Mukhisa Kituyi, Secretary-General, UNCTAD.

Air transport and indeed air navigation services have assumed greater importance in Africa because of Africa’s expansive 30 million km geographic land area, and the poor road and rail network to interconnect scores of villages and hub economies on the continent.

The expected and on-going traffic increase in Africa foretells increased pressure on Africa’s Air Navigation Service Providers (ANSPs) who must step up their capacities, capabilities and efficiencies to contribute to safe, more comfortable and more cost-efficient conduct of flights within, to and from the continent.

According to ICAO, States have been charged to “take action on achieving the objectives of implementing the priorities of the GANP (Global Air Navigation Plan) and providing data to the planning and implementation regional groups (PIRGS) on their progress and status of implementation.” ICAO Council President, Dr. OB Aliu, who is spearheading the call for peer review among and between ANSPs, describes it as “a very tangible mechanism to improve the capabilities of ANSPs as part of ICAO’s NCLB (No Country Left Behind) goal.”

In May 2017 in Freetown, Sierra Leone, African ANSPs adopted the framework of cooperation, Peer Review Manual and 2017/18 Roadmap as a base to accelerate ANSPs service quality improvement. This, according to Mr. Prosper Zo’o Minto’o, Deputy Regional Director, ICAO Western & Central African Office, describes the nature and the conduct of the Programme, and – provides detailed guidance to stakeholders involved in the planning, preparation, conduct and reporting of the peer support activities.

The review areas of the programme include Air traffic services (ATS), Meteorological service (MET), Operation of aircraft – Flight procedures (PANS/OPS), Communications, Navigation, Surveillance (CNS) as well as Search and rescue (SAR), Aeronautical information management (AIM), as well as Safety Management (SMS). African ANSPs are expected to make progress in this regard to maximize their support to aviation industry activities and economic development activities in Africa.

Indeed, much effort has been committed to improve on the facilities and manpower among African ANSPs, with some African States like Kenya, Nigeria, South Africa, etc. having made headways in PBN implementation, while all African States, as is the case globally, are at the initial stage of the ASBU implementation.

A new challenge facing African ANSPs which is also a challenge in other global regions is the need to integrate remotely piloted aircraft systems and drones into air traffic management framework. At the moment, industry stakeholders, ICAO and drone/RPAS manufacturers are expected to work out agreeable regulation and operational standards to ensure safe, secure integration of the remotely piloted unmanned aircraft in Africa’s controlled airspace.

The ICAO World Aviation Forum to be hosted in Abuja, Nigeria in November 2017, which will focus attention on infrastructure financing provides a platform for African ANSPs to develop partnerships for ATM infrastructure funding in Africa.

While the task ahead for ANSPs appear herculean, improvements in ANSP’s facilities and manpower will introduce new excitements and create benefits for all stakeholders including ATCOs, airlines, passengers and Africa’s economies.

As has been stressed in previous meetings of Africa’s ANSPs, the crucial element to guarantee speedy actualization of the ATM objectives in Africa remains close cooperation, collaboration and coordination among African ANSPs and other key partners within and outside the continent.

This is particularly vital and in the spirit of No Country Left Behind originated and pushed forward by Africa’s Dr. OB Aliu, who is ICAO Council President.

Air traffic will continue to grow in Africa, given the benefits of aviation to Africa’s economies, and the need to achieve Agenda 2063 economic objective of the African Union. African ANSPs must continue to evolve to support Africa’s aviation and economic evolution.