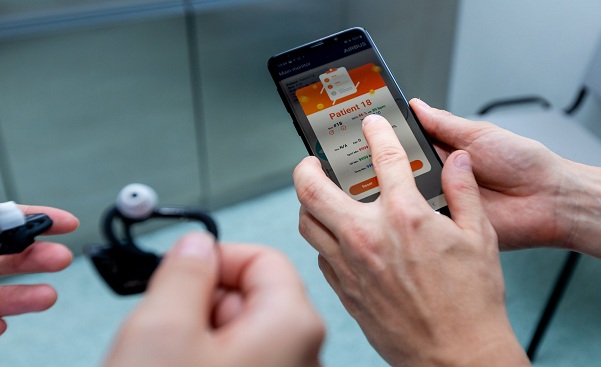 An innovative app-enabled health monitoring system developed by Airbus for military medevac (medical evacuation) flights is now demonstrating its capabilities in ground-based applications, including the fight against COVID-19.

This system – called the Smart Flying Hospital – was created so that medical personnel can better care for patients onboard lifesaving medevac airlift missions, while simultaneously transmitting data to hospitals on the ground so doctors can anticipate resources before their arrival. 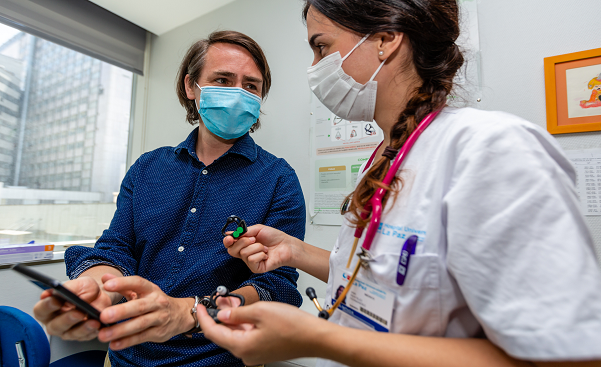 With Airbus’ Smart Flying Hospital, patients insert a sensor into their ear to record the heart rate, breathing rate, temperature and oxygen concentration.

The Smart Flying Hospital will undergo trials onboard an Airbus-built A400M military airlifter during 2021. In addition to its potential use by the military, an estimated 1,300 rescue helicopters and civilian air ambulances could benefit from the system worldwide, along with commercial airliners, according to Ignacio Sanchez Peral, a Control and Monitoring Systems Engineer at Airbus Defence and Space.

“About 2,000 passengers die annually during long-haul flights; this could be reduced if the Smart Flying Hospital is used on board for initial diagnoses – enabling life-saving measures to be taken quickly.”

Airbus’ Smart Flying Hospital is exceptionally easy to use: patients insert a sensor into their ear to record the heart rate, breathing rate, temperature and oxygen concentration. The data is then transmitted wirelessly and in real time to smartphones/tablets of medical staff, who access the data via an app. This relieves the burden on medical personnel and reduces complex wiring, while reducing their risk of being infected while working.

When the COVID-19 outbreak took on a global scale earlier this year, employees at Airbus’ Getafe, Spain site – including Sanchez Peral – recognised that the Smart Flying Hospital could help save lives in this new context, and they immediately took action.

After demonstrating the Smart Flying Hospital’s primary capabilities to health care providers in Spain, trials were set up at two facilities – La Paz University Hospital and Madrid Health Center Quince de Mayo – both of which have shown extremely promising results. 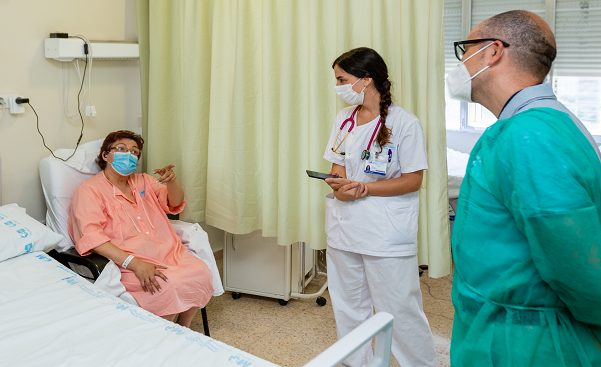 “It helps us monitor patients at a distance, 24 hours a day,” explained Dr. Ana Pertejo Fernández, of La Paz University Hospital. “If we detect, for example, that a patient has a fever or that the oxygen saturation has dropped, we can intervene more rapidly, improving the treatment and making things much easier for us and the patient.”

Dr. Roberto Garcia Zurita, a doctor at the Madrid Health Center Quince de Mayo, said many patients – including families and elderly people over 70 years old – previously had to wait up to three hours for their health check. “Now they get the ‘button’ in their ear, carefully cleaned beforehand, of course,” he added. “If the values are correct, they can save themselves the long wait, go home again after just one hour and do not need to expose themselves to unnecessary risks.”

According to Airbus’ Sanchez Peral, feedback from the two hospitals has been incredibly valuable for developing further improvements for the Smart Flying Hospital.

“In the midst of the biggest health crisis we’ve ever faced, a quick solution was needed to solve major problems. The Smart Flying Hospital proved its worth immediately.”

After a pitch to the Executive Committee of Airbus Defence and Space, the project team received the “green light,” plus financing for a prototype. The Smart Flying Hospital team is supported by Airbus’ ProtoSpace innovation incubator, which has facilities at Getafe, and in Manching, Germany.