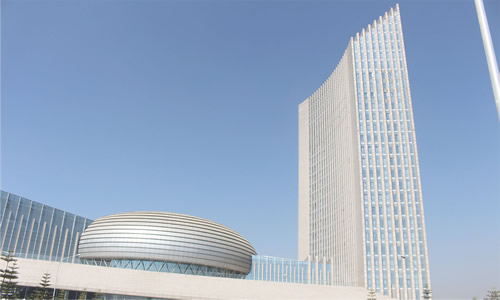 Africa turned another page in history on January 29, 2018 when His Excellency Paul Kagame, the newly-elected Chairperson of the African Union (AU) and President of Rwanda, led other AU Heads of State to formally launch the Single African Air Transport Market (SAATM). The launch took place during the 30th Summit of the AU at the headquarters in Addis Ababa, Ethiopia.

The launch of the SAATM effectively kicks off the full implementation of the Yamoussoukro Decision (YD) for the liberalization of air transport in Africa for the benefit of African airlines and all African States.

Special flag to commemorate the launch of SAATM

This new milestone is a testament to the resilient efforts of the African Union Commission (AUC) and its Infrastructure and Energy Commission, the African Civil Aviation Commission (AFCAC), the International Civil Aviation Organization (ICAO), the International Air Transport Association (IATA), African Airlines Association (AFRAA), and other aviation partners. Now, Africa is set to transition into a more innovative and efficient way of conducting air transport services that would help transform the continent’s emerging economy.

The SAATM or single African sky is a fundamental vehicle to catalyse the economic transformation of the continent,  and would enhance the impact of the “No Country Left Behind” programme of ICAO which aims to drive the sustainability and benefits of aviation in all global regions including Africa. This aligns with the United Nation’s (UN) Vision 2030 which aims, among other things, to ensure improved livelihoods globally.

President Kagame describes the SAATM launch as vital for Africa’s development, as he urges all African States to commit to implementation of the SAATM across the continent. President of Togo, His Excellency Faure Gnasingbe, who has been designated as the Champion for SAATM, expresses commitment to achieving the objectives of the SAATM for Africa. Togo, which is one of Africa’s smallest countries in terms of landmass, is building up its aviation and economic relevance in West Africa with active government participation in driving air cargo development on the continent. For big or small African States, what make the launch of the SAATM historic are the regulatory provisions that have been adopted.

H.E. Moussa Faki  Mahamat, Chairperson of the AU Commission, says African States that have signed the Solemn Commitment to the SAATM “have addressed provisions in their bilateral air service agreements (BASAs) to ensure compliance with the Yamoussoukro Decision (YD).”

Heads of State at the 30th AU summit in Addis Ababa, Ethiopia, where the SAATM was launched on January 2018

“In that regard, the Institutional and Regulatory Texts of the Yamoussoukro Decision which are considered essential for the single market to function effectively have been adopted. The Commission has also drafted guidelines for the negotiation of air service agreement with third countries and a human resource development fund (HRDF) has been established and placed under the management of the African Civil Aviation Commission (AFCAC),” the Chairperson further explains.

The AU Commissioner for Infrastructure and Energy, Dr. Amani Abou-Zeid, says the SAATM drives more opportunities to promote trade, cross-border investments in the production and service industries, including tourism which will create additional jobs. In the same vein, Mr. David Kajange, Head of Transport and Tourism Division, AUC, and Mr. Ngoe Ndoh, Senior Air Transport Consultant, African Union, call for concerted efforts for the sustainability of liberalized air transport market and its tremendous benefits to African airlines and States.

Mr. Raphael Kuuchi, IATA’s Vice President for Africa, describes the launch of the SAATM as ‘momentous.’ “Now it’s time to get down to the work of implementation. Greater connectivity will lead to greater prosperity. Governments must act on their commitments, and allow their economies to fly high on the wings of aviation,” Mr. Kuuchi submits.

L-R: President Issoufou Mamadou, of Niger, and President Muhammadu Buhari of Nigeria, at the 30th AU Summit at which the SAATM was launched

“Whenever you liberalize there would be increased travels and the airlines would have more passengers to carry, more cargo to carry. It will open up African routes and you operate in a larger area and can take full advantage of that. But for the airlines to benefit, they have to strengthen their operations,” says Dr. Olumuyiwa Benard Aliu, President, ICAO Council.

IATA is keenly supportive of a liberalized African aviation market because of its attendant benefits to Africa; and it provides data to back Africa’s liberalization.

“An IATA survey shows that if just 12 key African countries opened their markets and increased connectivity an extra 155,000 jobs and US$1.3 billion in annual GDP would be created in those countries,” says Mr. Kuuchi. An additional 5 million new passengers could be generated among the 12 liberalized States, the study also shows. Going by these projections, the benefits on the larger 54-State African space would be astounding.

L-R: Senator Hadi Sirika, Minister of State for Aviation, Nigeria; HE Moussa Faki Mahamat, Chairperson, African Union Commission (AUC); HE Paul Kagame, President of Rwanda and African Union Chairperson;  HE Faure Gnasingbe, President of Togo and Champion of Single African Air Transport Market (SAATM) and other officials at the launch of the SAATM in at the AU Headquarters, Addis Addis Ababa, Ethiopia, January 29, 2018

At the highest level of policy-making and governance in Africa, the AU is poised to achieve the full implementation of the SAATM, which is a flagship project of the AU Agenda 2063 to transform Africa’s entire economy. Relevant arms of the AU have also been realigned to pay greater attention to aviation support and development.

While the African Civil Aviation Commission (AFCAC), which is the Executing Agency (EA) of the YD, is lauded for reviewing and updating the African Civil Aviation Policy and framework of the YD, Ms. Iyabo Sosina, Secretary General of AFCAC, emphasizes that States should replace their Bilateral Air Services Agreements (BASAs) policies with the YD’s AFCAP and effectively implement the SAATM.

Dr. Ibrahim Assane Mayaki, CEO of the New Partnership for Africa’s Development (NEPAD), underscores the essence of ensuring the success of the SAATM to more effectively integrate Africa.

“Africa is the world’s second-largest and second most-populous continent. It is therefore critical that we create a fully connected continent and find ways of integrating and simplifying transport infrastructure. The realisation of the Single African Air Transport Market will be dependent on progressive policy and regulatory reforms that will stimulate growth in Africa’s aviation industry.”

Mr. Symerre Grey-Johnson, NEPAD Agency’s Head of Regional Integration, Infrastructure and Trade, also states: “The importance of air transportation in Africa cannot be understated. Even though Africa contributes to only 1 per cent of global air cargo, this figure also accounts for 35 per cent of the value of goods transported to the continent. In addition, 85 per cent of Africa’s tourism market depends on air transport.”

African airlines would possibly be the greatest beneficiaries of SAATM if they reposition and equally get proper government and industry support. Capt. Edward Boyo, CEO of Nigeria-based Overland Airways, emphasizes that African airlines need the support of African governments by way of conducive operating environments, while airlines must reposition their operations to take up the opportunities that the SAATM would provide on the continent.

A number of States are slow in signing the Solemn Commitment for the SAATM, and some airlines are hesitant over the implementation of the SAATM. However, these States and airlines agree to the overall benefits of the SAATM to Africa.

Their hesitation is essentially tied to their own uncertainties in the more competitive SAATM market, and their indecision to rise up to the new opportunities SAATM would bring.

Some of the question marks they have raised regarding level playing fields under the YD have been answered by the reviewed African Civil Aviation Policy and the revised framework of the new YD which have been approved and adopted by the AU by way of the launch of the SAATM. States and airlines now need to continue to review the emerging market and basket of opportunities to make the most of the SAATM. According to Mr. Santos Miguel of Boeing, for instance, not all States can have an airline; therefore airline partnerships will become vital going forward in Africa, as has proved beneficial in Latin America.

Industry analysts believe airlines opposing the SAATM are averse to positive change and competitive innovation. “They just want to keep doing their poor airline management and some need their monopoly of poor services provision. Airlines’ opposition to SAATM is selfish, as they do not consider the benefits of SAATM on other aspects of aviation and economy or other airlines that are ready to enhance their operation to fit into the competitive SAATM environment” says an industry analyst.

Dr. Aliu, ICAO Council President says: “I don’t know why they should have an opposition because empirical evidence has shown that the airlines would be strengthened and it’s an open entry and open exist market. Those who demonstrate the corporate governance that is required would benefit from it and those airlines who are still using old models of operation may find it difficult in the competitive atmosphere. But the whole essence is that it is not only with respect to the airlines, but it is to the passengers; fares will drop, there would be more services and the downstream effect will be significant.”

One of the key ingredients to bring the SAATM to fruition is AU’s avowed fight against corruption, which is Championed in 2018 by Nigeria’s President Muhammadu Buhari. Corruption has had devastating impact on  the resources needed to build-up Africa’s aviation industry and economies. Reigning in corruption could guarantee the appropriate use of available resources to build-up State and regional infrastructure and economic activities that will support and also be supported by aviation. This will enhance the chances of resounding success for the SAATM.

Most observers and players alike are optimistic over the success of the SAATM especially given the observance of the key provisions of the YD. What is most crucial going forward is to bring all States on-board the SAATM value train by educating them on their benefits as States in the SAATM environment. States must also ensure commitment and sincere implementation of policies underlying the SAATM. States and regions must engage in improvement of aviation infrastructure, safety and security. More airlines are expected to become more successful in Africa as they embrace the right business models. In addition, free movement across Africa and implementation of free trade areas as well as innovative economic and fiscal policies are other factors to make the SAATM a resounding success.

“Africa is the world’s second-largest and second most-populous continent. It is therefore critical that we create a fully connected continent and find ways of integrating and simplifying transport infrastructure.”