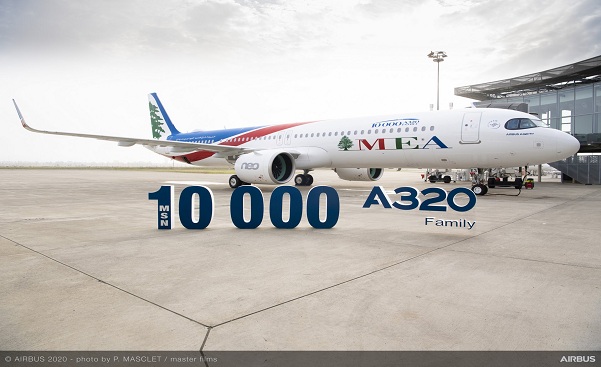 MSN10, 000 is the third A321neo to join the all Airbus MEA fleet, taking the fleet size to18 aircraft. MEA received its first A321neo aircraft earlier in 2020 and will be taking another six A321neos over the coming months.

Mohamad El-Hout, MEA Chairman and Director General, stated: “We are honoured to receive the state of the art A321neo with its distinctive serial number 10,000 coinciding with the 75th anniversary of Middle East Airlines and specially after receiving MSN5, 000 back in 2012.”

“Since we first acquired an A320 Family aircraft in 2003, we have not only benefited from the outstanding operational efficiency of the aircraft but were also the first airline to introduce the wide-body cabin product on a single-aisle aircraft which has become a trend in the airline industry afterwards,” El Hout continued.

“Unfortunately, due to the current situation in Lebanon, this time we will not be able to celebrate the delivery of the MSN10,000 in Beirut, as we did with the MSN5,000, but I am sure that in these challenging circumstances, it is a ray of light, hope and motivation to surpass our nation’s difficulties,” El Hout noted.

Christian Scherer, Airbus Chief Commercial Officer, says: “Airbus is proud to continue building its long-standing partnership with Middle East Airlines which already operates one of the most modern Airbus fleets in the world.

The airline’s A321neo is powered by Pratt & Whitney’s Pure Power PW1100G-JM geared turbofan engines and is configured in a comfortable two-class layout with 28 seats in Business and 132 seats in Economy Class from Recaro.

It is also equipped with the latest generation in-flight entertainment system and high-speed connectivity from Panasonic. Incorporating the latest engines, aerodynamic advances, and cabin innovations, the A321neo offers a reduction in fuel consumption of 20% as well as a 50% noise reduction.