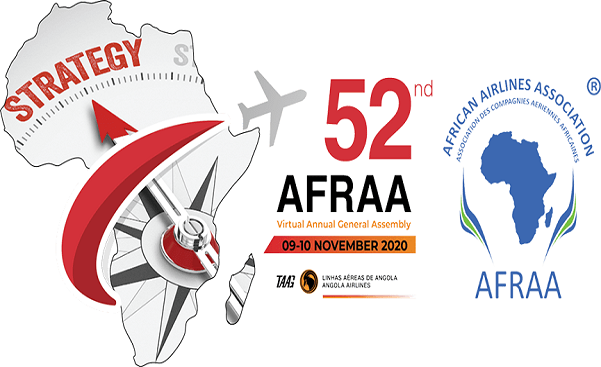 The African Airlines Association (AFRAA) and its airline members, partners and industry stakeholders have begun the much anticipated 52nd Annual General Assembly (AGA) of the Association.

The AGA, hosted online by TAAG Angola Airlines in place of a physical conference scheduled for Luanda, Angola, has been attended by high-level government and private-sector dignitaries in the air transport industry.

Ricardo De Abreu, Minisster of Transport of Angola, who declared the virtual AGA open called for joint efforts among airline to overcome the adverse effects of the COVID-19 pandemic. He expressed optimism over hosting the industry physically in Angola in 2021 for the 53rd AFRAA AGA which TAAG Angola has also agreed to host.

According to Mr. Abderahmane Berthe, Secretary General of AFRAA, the Assembly is being convened virtually due to the exceptional circumstances arising from the impacts of Covid-19 pandemic.

The theme of this years’ event is  “Redefining Air Transport for a New Era”, and it looks to “draw the roadmap for a successful restart and recovery air transport industry,” said Mr. Berthe, as air transport leaders and decision makers will deliberate on strategies to navigate the turbulent times as the industry embarks on a new era.

Mr. Rui Carreira, 2020 President Of AFRAA And CEO Of TAAG Angola, said “2020, is a year never experienced in all facets of our lives. That makes our AFRAA 52nd AGA a very special one, the AGA that will be kept in the annals of history for a very long time. For the first time in our lives we are meeting in a virtual setting, meaning that we have to meet and yet we are distantly from each other.”

He expressed confidence that this remote meeting will encourage all of us to be resilient as we face the challenges of the day with a determination to secure our future.

He described 2020 as “a very difficult year for our industry, mainly for us, African carriers.”

“Our struggles come from way before the pandemic, and with the current situation, many African airlines have faced the biggest challenge of their lives. Although the upcoming years will be challenging, and recovery may be slow, we should not be discouraged. We should see the positive side. This is a time of resetting, restructuring, and setting new course for us, African airlines. This is indeed our wakeup call. We must embrace the moment and take heed of the challenges as we map the way forward,” he stated.