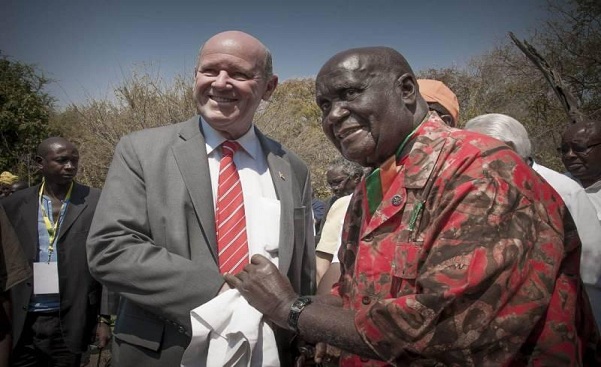 Alain St. Ange, President of the African Tourism Board, and Cuthbert Ncube, Chairman of the Organisation have expressed sadness over the passing of President Kenneth Kaunda, the Founding President of Zambia.

Alain St. Ange was joined by Cuthbert Ncube to express the African Tourism Board’s sympathy to the Government and People of Zambia and to the Kaunda family on the demise of President Kaunda of Zambia.

“I have had the pleasure and the honour of meeting with President Kaunda on many occasions on my different working missions as the Seychelles Minister responsible for Tourism. He was a man of the people and as he waved his white handkerchief as his trademark sign, he ran into conferences to the Speakers’ Podium always with the same grace and humility. Our discussions about Africa and the Pan-Africanism spirit was always enlightening and personally rewarding,” said Alain St. Ange.

On his part, Cuthbert Ncube, the Chairman of the African Tourism Board posted a message saying “Africa has lost a great States Man, a Pan-Africanist Dr. Kenneth Kaunda, the father of Zambia, may he rest in Peace. And we continue to fight for a United Africa through Tourism as a unifying sector”.

The Founding President of Zambia, Mr. Kenneth Kaunda, and Mr. Alain St.Ange, the former Seychelles Minister met at the International Peace Park in Livingstone during the IIPT tree planting event to mark the UNWTO 20th General Assembly which is being organized jointly by Zambia and Zimbabwe. Both former President Kaunda of Zambia and Minister St. Ange of the Seychelles were guests of Mr. Louis D’Amore, the President of the USA-based IIPT (International Institute for Peace through Tourism Organization).

Mr. Alain St. Ange, eulogized founding President of Zambia, saying: “Dr. Kaunda helped change Africa with pushing forward the principle of a free Africa,” further describing the departed African leader as “A President who believed that tourism could be the industry that could change the lives of the citizens of the continent, but that this would only happen when Africa works as one.”