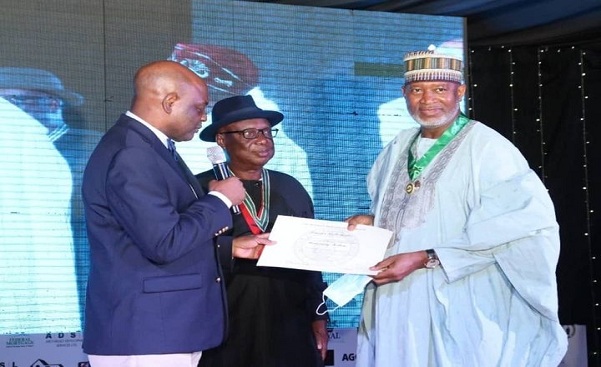 The Nigeria Minister of Aviation Sen. Hadi Sirika has received the Honorary Fellowship and Distinguished Service Award of the Nigerian Institute of Architects for the unprecedented infrastructural developments within the aviation sector under his leadership.

The Award was given to the Minister at the Institute’s Architecture Annual Award which took place recently in Abuja.

According to the Institute, under the supervision of Sen. Sirika, the Ministry of Aviation embarked upon 157 projects and delivered 134 to 100% completions, for the first time in the history of Nigerian Aviation.

“The Abuja and Lagos airports were certified under his watch. It is also on record that Aviation has become the fastest-growing sector in the Nigerian economy Pre-Covid 19 passenger grew from 8 to 18 million and similarly all allied businesses have grown tremendously”  the citation stated.

Sen. Sirika, while receiving the award expressed his appreciation to the Institute for recognizing his modest achievements in the aviation sector, even though he was not an architect by profession.

According to him, he had been invited to receive numerous awards honours fellowships and even honorary doctorate degrees, numbering about 390 all of which he declined.

Sen. Sirika said he had to make an exception for the Nigerian Institute of Architects award because of the integrity of the institution.

“I am more than glad to accept this, I cherish it, I will keep it, I will nurse it and I will carry it to one of my sons or daughters who will be an architect,” Sen. Sirika concluded.