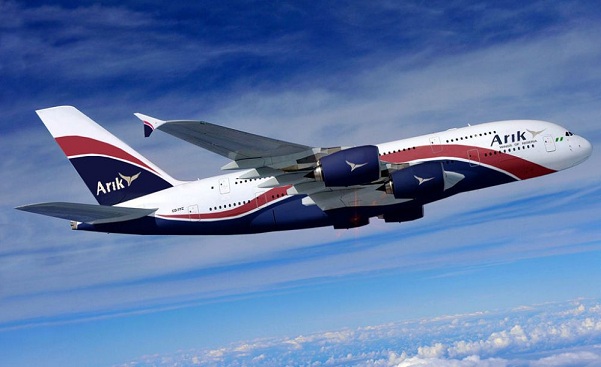 Arik Air is making efforts to minimize the adverse impact of its flights to be grounded following the sack of its pilots that stopped work while demanding for discussions with the airline’s Receiver Manager.

A statement from Arik reads in part: “The Pilots did not serve a strike notice in accordance with labour laws. They neither submitted any issue of dispute to the National Association of Airline Pilots and Engineers (NAAPE), their umbrella union nor did they submit any statement of demands to the management of the company.”

Also, Arik stated tat “There were also no ongoing discussions between the management and the Pilots on any unresolved labour issues. Their actions were spontaneous and callous”.

“Arik Air finds it rather treacherous of the Pilots to contemplate a strike action at this Yuletide season which is the peak period for airlines all over the world. They peddle for naught the reputation and financial health of the company.”

“It is instructive to note that the management of the airline has of late had very fruitful discussions with relevant aviation unions including the National Association of Airline Pilots and Engineers (NAAPE), on conditions of service for all employees. This has led to the signing of a robust condition of service and redundancy benefits for staff.”

Airlines make the most of festive seasons to optimize revenue in an industry where profit margins are very thin and airlines are faced with huge cost of operations and other challenges in the operating environment.

The sacking of Arik Air pilots adds to the drama in the air transport industry in Nigeria where delayed flights partly due to weather and other conditions, as well as as frustration among large number of air travellers going for Christmas and festivities have been experienced.