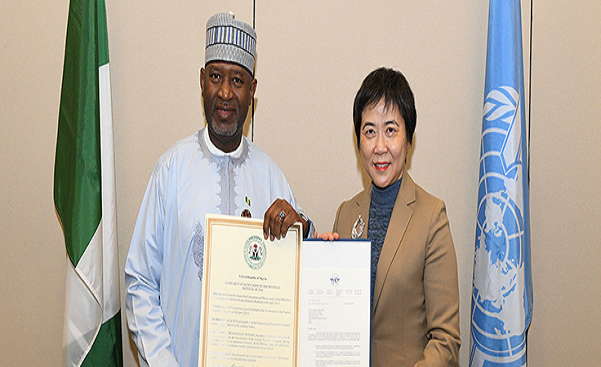 The Protocol to Amend the Convention on Offences and Certain Other Acts Committed on Board Aircraft, done at Montréal on 4 April 2014, shall enter into force on 1 January 2020. The necessary twenty-second instrument of ratification was deposited with the Secretary General of ICAO, Dr. Fang Liu, by the Government of the Federal Republic of Nigeria on 26 November 2019.
The instrument was ratified by the President of Nigeria, H.E. Muhammadu Buhari, on 22 November 2019, and deposited by Nigeria’s Minister of Aviation, H.E. Hadi Sirika.
The Montreal Protocol 2014 amends the Convention on Offences and Certain Other Acts Committed on Board Aircraft, done at Tokyo on 14 September 1963 (Tokyo Convention, 1963). “The Protocol addresses the issue of rising incidents of unruly and disruptive behaviour on board aircraft by significantly improving the ability of States to expand jurisdiction over relevant offences and acts to the State of landing and the State of the operator,” declared Secretary General Liu. “The Protocol will also serve to enhance global aviation security provisions by expressly extending legal recognition and protections to in-flight security officers.”
The current list of States which have signed, ratified, accepted, approved or acceded to the Montreal Protocol 2014 is available on the website of the ICAO Treaty Collection. After the date of its entry into force, the Montreal Protocol 2014 shall no longer be open for’ signature but shall remain open for ratification, acceptance, approval or accession.
Share on Social Media