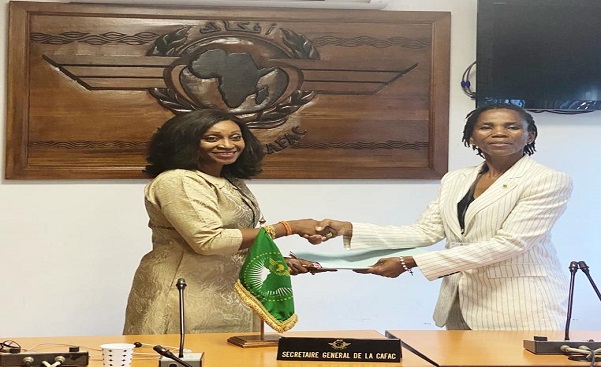 Ms. Adeyemi also pledged that AFCAC, in collaboration with its member States, Regional Economic Communities (RECs), regional and international stakeholders and partners will be at the heart of transforming air transport in Africa for the benefit of its people and the world at large.

In a highly anticipated ceremony at the headquarters of AFCAC in Dakar, Senegal, Ms. Adeyemi received her handover documents from Ms. Angeline Simana who has been the Acting Secretary General of AFCAC since early 2022.

Mr. Silas Udahemuka, President of AFCAC, who virtually chaired the handing over ceremony, wished Ms. Adeyemi success in her new role and assured her of the Bureau’s support to the Secretariat, as he called for a strategic approach to meet the expectations of member States, partners and stakeholders. He also urged all AFCAC staff to rally round the new AFCAC Secretary General with collective responsibility to enhance effectiveness at all levels. 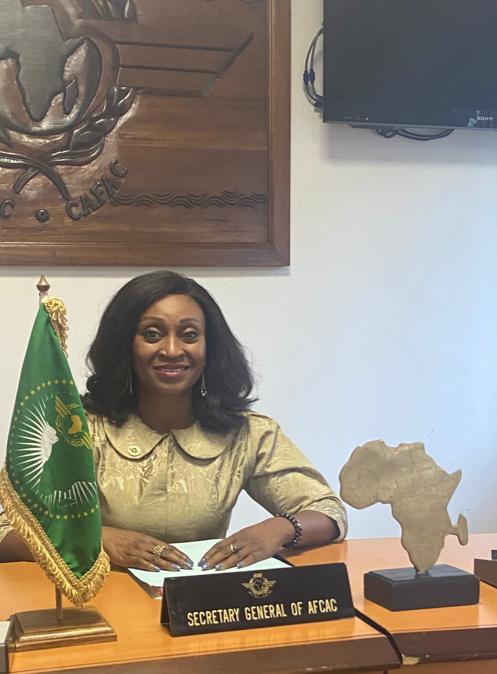 Ms. Adeyemi assured the President of AFCAC, who is also the Director General of the Rwanda Civil Aviation Authority, that all shall be done to enhance the effectiveness of AFCAC. She also expressed gratitude to all African States for their resounding support which led to her appointment as AFCAC’s new Secretary General.

She assured that she and the AFCAC team would serve and deliver on their mandates and objectives regarding air transport development in Africa.

“I and the team at AFCAC are here to serve and deliver on our mandates and objectives of ensuring a liberalized, safe, secure, environmentally friendly, reliable, sustainable and modern air transport industry in Africa. We are also well guided by the President of AFCAC and members of the AFCAC Bureau, who provide oversight and direction to the Secretariat. We are at your service,” Ms. Adeyemi stated.

“I and the AFCAC team count on your kind support, collaboration, cooperation and partnership to fly African aviation to higher heights,” Ms. Adeyemi also emphasized.

Before joining AFCAC, Ms. Adeyemi worked for 10 years at the International Air Transport Association (IATA) where she held several positions serving the Africa region She was the IATA focal point for the implementation of the Single African Air Transport Market (SAATM) and a Private Sector Champion of the African Continental Free Trade Area (AfCFTA), two strategic policy initiatives of the African Union designed to promote intra–African connectivity and trade to secure Africa’s integration and prosperity.