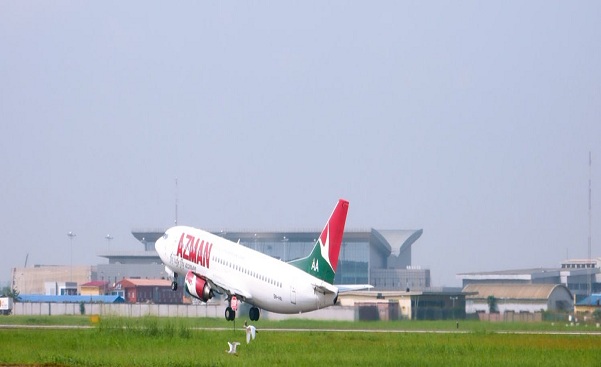 AzmanAir has said it is committed to passenger safety, following an incident in Lagos during which one of the airline’s aircraft had a “slight challenge with the tyre after landing at the Murtala Mohammed International Airport Lagos.”

The airline said: “On Tuesday, 16 February 2021, around 6pm, our Aircraft with Registration Number 5N-SYS operating Flight ZQ2325 inbound Lagos from Abuja was discovered to have a slight challenge with the tyre after landing at the Murtala Mohammed International Airport Lagos.”

Explaining further, the airline note that “the first approach to landing unto runway 18L was discontinued due to bad weather around Lagos thereby holding a while for the weather to clear.”

According to AzmanAir, the Aircraft was landed safely on the second attempt, at the international wing of the Airport, “only for the pilot to notice some vibration and sound of a burst during ground rolling.”

The pilot-in-command, immediately contacted control tower for assistance and briefed the passengers that were eventually disembarked safely and transferred to the terminal. All the passengers were calm, as it was not a life-threatening incident, AzmanAir stated.

According to the airline, the incident was calmly controlled with no question of any casualty, this is so because of the premium it places on safety. “Our experienced flight crew carried out all the necessary procedure base on Aviation standard and recommended practices,” it noted.

“Azman Air remains committed to the Safety of our Passengers and we will continue to demonstrate this commitment in every aspect of our operations. Kindly accept our unreserved apologies for the inconveniences caused,” the airline added in a statement.

The incident had caused the Federal Airports Authority of Nigeria (FAAN) to temporarily close the  Runway 18R/36L at the Murtala Mohammed Airport, Lagos. “The closure is due to a landing incident involving a Boeing 737 Azman Air aircraft with registration 5N SYS, and flight number ZQ2325. The aircraft had a tyre burst after landing on this runway,” FAAN had stated.

The runway has since been reopened today, February 17, 2021, according to a tweet from FAAN: “Runway 18R in MMIA Lagos that was temporarily closed yesterday due to a tyre burst on landing by Azman air aircraft is now open.”