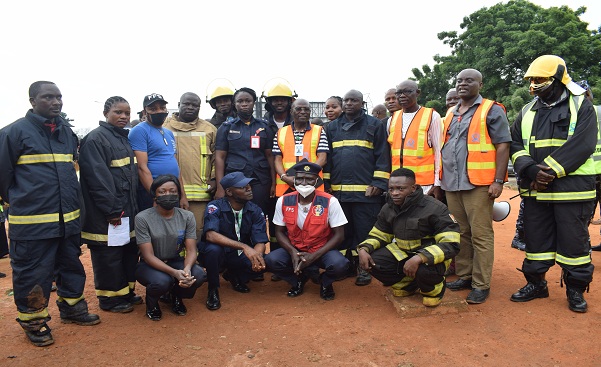 The Nigerian Airspace Management Agency (NAMA) said it has joined forces with critical stakeholders in aviation emergency rescue operations to conduct a live aeronautic simulation of an air crash which occurred at the Mafoluku area of Oshodi in Lagos, a few meters from Runway 18 Left and the local airport, Ikeja ahead of the International Civil Aviation Organization (ICAO) audit coming up by first quarter of 2022.

Code named “SAREXNAMA 2021,” the search and rescue exercise focused on a disaster that could result from an air crash and create mass casualty incident which requires a coordinated response from critical stakeholders saddled with the responsibility of managing aviation emergencies.  The mock air crash search and rescue exercise involved an aircraft with registration No. ZYMMM from Abuja to Accra. The aircraft diverted to Lagos due to electrical problem, and on board were 38 souls including 4 crew. 15 survivors were rescued while 23 others were unaccounted for.

Capt. Fola Akinkuotu, Managing Director of NAMA, expressed delight for the huge turnout by different agencies and stakeholders. Capt. Akinkuotu however noted that several gaps were observed during the exercise especially in the areas of coordination and response to alert, even as he assured that the agency would work assiduously with relevant stakeholders in order to close the said gaps.

As specified by the Standards and Recommended Practices (SARPs) of ICAO Annex 12, Nigerian Civil Aviation Regulation Pt. 14 of 2005, NAMA Search and Rescue Manual and the National Disaster Response Plan by NEMA, in accordance with Act 12 of 1999 constitution,  the mock search and rescue operation is  being coordinated by NAMA annually in order to test the procedures and communication between NAMA and other agencies involved in search and rescue and their collaboration; ascertain the prompt response of NAMA facilities and personnel to an incident, ascertain the preparedness of other agencies involved in the exercise and their response to alert as well as verify the operability of the joint rescue coordination centre.

NAMA said the exercise also seeks to evaluate the effectiveness of all functional elements of its Search and Rescue systems and the collaboration with other organizations within and outside the airport in the event of an emergency.