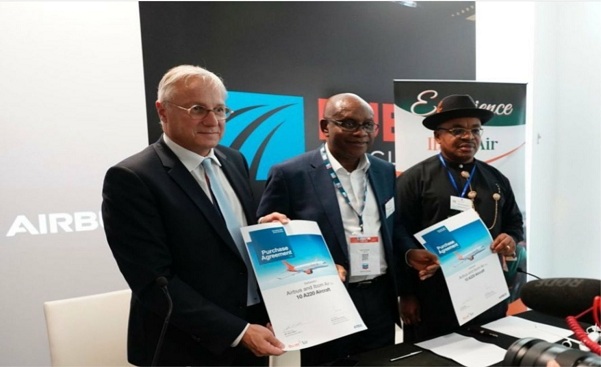 Ibom Air says it has placed an order for ten A220 aircraft with Airbus, at the Dubai Air show.

According to Ibom Air, it took an innovative approach to making the choice of the A220. The airline started by wet-leasing two (2) A220s for a year, to test the suitability of the aircraft for their needs. Within 6 months of this process, the airline was able to validate the A220 as the right choice for its domestic and regional aspirations. The order of the ten (10) Airbus A220 is in line with the airline’s aggressive growth plan, which will see it expanding its footprint into new domestic routes as well as regional routes covering West and Central Africa in the immediate future.

Ibom Air reveals that the first phase of this expansion is set to cover cities like Malabo, Douala, Libreville, Kinshasa, Accra, Abidjan, Freetown, Banjul and Dakar. Ultimately the airline intends to operate throughout the continent of Africa.

His Excellency Mr.Udom Gabriel Emmanuel, Governor of Akwa Ibom State remarks: “earlier in the year, we gathered to welcome the first Airbus into our fleet, and I must say that we are proud to be the first airline to order the all-new Airbus A220 in Nigeria. The A220 will allow us to increase the number of passengers into Akwa Ibom, thus bringing more first-time visitors and business travelers to the State. These efforts reflect our commitment to enabling local commerce and industry, in line with the State’s economic growth strategy.”

Mr Mfon Udom, CEO of Ibom Air adds:: “It gives me great pleasure to be here at the announcement of Ibom Air’s order for 10 Airbus A220s. We are pleased with the steep growth we have achieved in the two (2) years and five (5) months since we commenced operations, a growth mainly driven by the massive embrace of our product and brand by the Nigerian domestic flying public.