The President said he is confident that the new terminal, with sixty-six check-in-counters, sixteen Immigration desks at arrival, twenty-eight Immigration desks at departure, and eight security screening points, among others, will go a long way in contributing to the socio political and economic prosperity of the nation.

The President revealed that the new terminal will increase the airport’s capacity and management services to about 14 million passengers per annum, with the attendant positive multiplier effects, by creating about 3,000 direct and indirect employment opportunities for the youths, increased inflow of Foreign Direct Investments and exponential growth in the Gross Domestic Product.

President Buhari said that he has directed the Minister of Aviation to fast track the airport concession programme of the four international airports. Similarly, 12,000 hectares of land has been approved to accommodate the construction of a second runway in Abuja and other developmental projects.

“All these aligns perfectly with our Aviation Roadmap, which was developed in 2016, for the purposes of establishing critical infrastructure, including a National Carrier, Maintenance, Repairs and Overhaul Centre and improved Airports Terminals through concession, to boost aviation practice and take the industry to the next level, reflecting global standards,” President Buhari added. 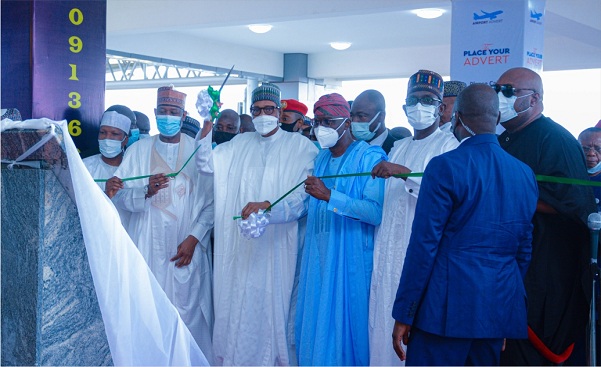 “We have also complemented these robust initiatives with specific fiscal policies to drive aviation infrastructure renaissance.

These include the designation of 4 airports, namely Lagos, Abuja, Kano and Port Harcourt as Free Trade Zones, in which customs duty is not applicable; removal of VAT on all forms of shared transportation, including air transportation; and exemption of commercial aircraft and spare parts from VAT payment,” President Buhari added.

President Buhari noted that similar projects at both the Nnamdi Azikiwe International Airport and Port Harcourt International Airport were completed and commissioned by this administration and Nigerians have since been benefiting from the positive economic impacts of those magnificent terminals, while the one in Kano has also been completed, and will be commissioned soon.

The Minister Of Aviation Senator Hadi Sirika said Aviation provides the only rapid worldwide transportation network, which makes it essential and most important infrastructure for global logistical ecosystem. It boosts economic growth, creates job, and facilitates international trade, commerce and tourism ultimately raising the standards of living of the teeming population. Aviation remains the only medium to achieving continental integration and interaction, the dream of African Union (AU) agenda 2063.

The Minister of Aviation revealed that a recent Aviation sector study for Nigeria by International Air Transportation Association (IATA) in June 2020, showcases the significant contribution of air transportation to the National economy, through providing 241,000 jobs (direct and indirect) and a contribution of $1.7 billion to the National economy. “However, our overall goal is to grow the Aviation sectors contribution from the current 0.6% to 5% (approximately $14.166 billion).” 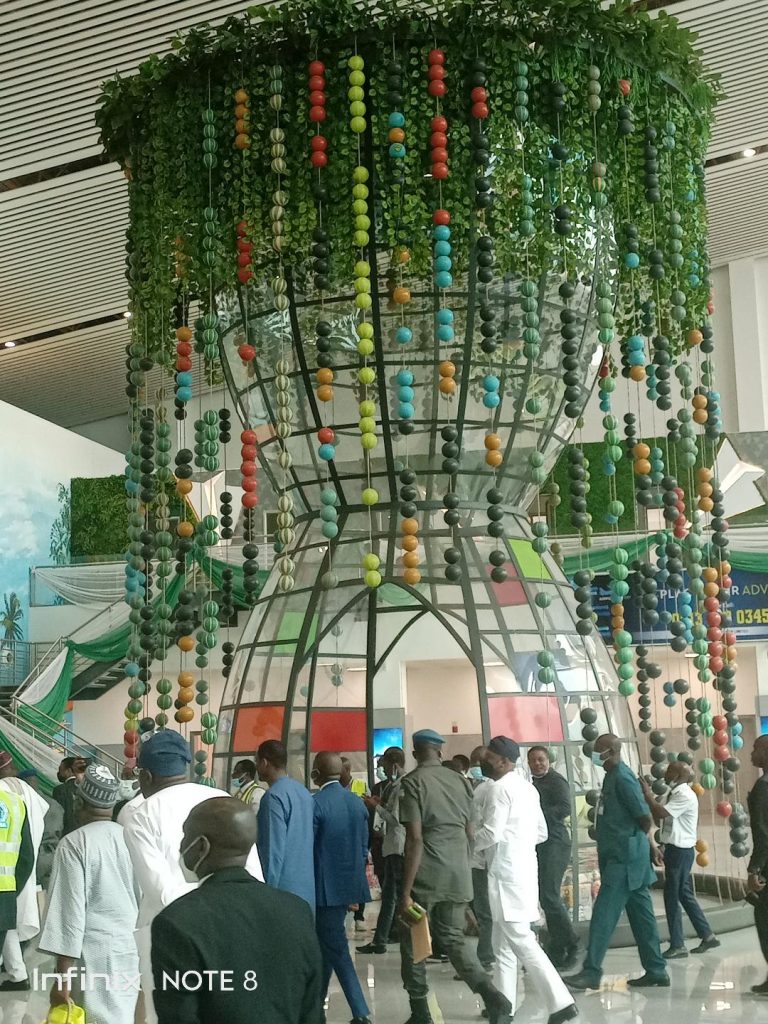 In the same vein, IATA projects the Air transport market in Nigeria is forecast, under the “current trends” scenario, to grow by 174% in the next 20 years. This would result in an additional 9.4 billion passenger journeys by 2037. If met, this increased demand would support approximately US $4.7 billion of GDP and almost 555,700 jobs.

“The Airport Concession project (including the newly commissioned terminals) has reached advanced stage. The Ministry will be issuing Request for Proposal (RFP) to the shortlisted firms before the end of March. We expect to announce a partner in 2nd Quarter 2022 and handover by 4th Quarter 2022,” Sen. Hadi Sirika added.

“Aviation business suffers from issue of access to foreign exchange by local and foreign airlines and the ability to repatriate blocked funds. Nigeria currently holds $283m of foreign airlines funds blocked in the country. I would like to humbly request the support of the Central Bank, through the directive of Mr. President, to prioritize access to forex for all carriers both local and foreign. and to work out a mechanism to clear the existing backlog urgently and prevent subsequent build up,” Sen. Hadi Sirika revealed.

Sen. Hadi Sirika requested that the President directs NNPC to import Jet-A1 in good quantities and devise means to sustain supply as well as directing CBN to allocate Forex for the major marketers to sustain supply to forestall chaos in the sector.

At the commissioning ceremony of the MMIA terminal 2, the Lagos State Government signed a Memorandum of Understanding (MoU) with the Federal Airports Authority of Nigeria (FAAN) to construct a major road connection between the international and domestic terminals and a 9km Airport-Shasha-Alimosho link Road to shorten travelers’ transit time.

The Lagos state Governor Babajide Sanwolu and Minister of Aviation, Hadi Sirika along with teams from both the state government and the Federal Airports Authority of Nigeria were present at the signing ceremony.

Gov. Babajide Sanwolu said: “The partnership between the Lagos State government and FAAN representing the Ministry of Aviation is also something we are truly proud and happy to be part of. So, what we are doing is opening up other alternative routes that would bring people to the airport that would make communication and journey time into this airport delightful.”

Sen. Hadi Sirika said: “In this administration we will be constructing an air rail connection between the domestic and international airports to shorten traffic time between the two and we will be partnering the Lagos state government to see that to fruition.”