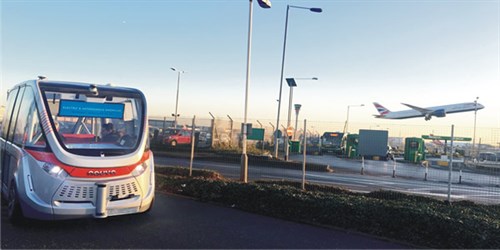 Autonomous vehicles are coming, and they are going to change the way we move. It’s been estimated that they could create a $42 billion market by 2025.

Indeed, airports have contributed to the development of autonomous vehicles (AVs), providing an environment where the technology can serve particular functions in a controlled manner.

As the AV industry takes off, however, airports are under growing pressure. IATA figures show that growth in the global air passenger traffic market reached a 12-year high in the first half of 2017, yet over half of airports globally are loss making.

Improving Passenger Experience – Within The Airport

Getting around an airport can be one of the most stressful parts of a journey. Major hubs by their nature are big and busy – Heathrow caters for over 75 million passengers annually with a total size of 1,227 hectares.

In fact, Heathrow’s Terminal 5 is the largest free-standing structure in the UK, with 2.8 miles of tunnels and a roof area the size of five football pitches.

The use of AVs can dramatically improve the passenger experience within airports of this size. Heathrow, for example, offers battery-powered, driverless Personal Rapid Transit pods, which provide a ‘last-mile’ transport solution, shuttling passengers from the long-stay car park to Terminal 5.

The on-demand vehicles have helped reduce congestion and cut emissions by replacing a fleet of shuttle buses, which made approximately 70,000 journeys back and forth each year.

Elsewhere, passengers with accessibility issues are transported around airport terminals via buggies. With the development of AV technology these could become driverless too, allowing the current operators to be redeployed to other customer-facing roles.

Similar vehicles could also transport passengers between terminals – improving the customer experience and opening up revenue-generating opportunities if positioned as a premium, paid-for service.

With airports looking to technology to improve efficiency and increase profitability, AVs could have a role in streamlining airside processes.

Indeed, with many vehicles travelling around the airport’s apron, such as shuttle buses, fuel and baggage trucks, and mobile access steps, there is potential here for AVs to be used.

For a start, these vehicles could be controlled centrally, meaning that operators could take a holistic view to drive efficiency gains. As part of this, vehicles could be redeployed at a moment’s notice, without today’s reliance on driver availability.

AVs will also have the capability of streamlining baggage transport and delivery. At the moment, bags are loaded manually from the conveyer belt, into a container, onto a tug and then driven to the plane.

Given that the routes bags travel are pre-defined, there is the potential to automate much of this, with AVs playing their part in moving bags from the building to the plane or around the terminals.

A number of airlines are offering their premium customers a chauffeur service to and from the airport. However nobody yet has seized the opportunity to position themselves as end-to-end transport providers.

The experience of airports using AV technology already provides them with the opportunity to lead the way in providing the whole door-to-door journey for their customers.

In addition to generating new revenue streams, these intelligent vehicles, and the data they generate, could provide airports with far greater insights in terms of capacity planning, crowd-modelling, real-time staff requirements and security needs.

Much of this will be dependent on the collaboration and integration between the various, relevant stakeholders, including the airlines and external/public transport providers.

A co-ordinated approach is absolutely essential to truly delivering a seamless passenger experience within these developments.

If this was integrated with airport baggage systems, then these cars could pick up a passenger’s bags before collecting them from the pickup point at a set time – leaving travellers to move through security, relax with a coffee or do more shopping, before traveling home.

AVs will dramatically reduce the amount of car parking space needed. Today, car parks generate around 20-30% of an airport’s revenue but, while losing parking income may be a daunting prospect for airports, it does present opportunity.

Research by customer loyalty specialists, ICLP, found nearly a third of travellers would arrive at an airport earlier if it offered engaging entertainment or exhibitions.

The real estate freed up by car parks will be key to this, providing a place for shopping malls or cinemas to attract investment, entice a new customer base and unlock new revenue streams.

It would also give passengers waiting for flights more to do should their departure be delayed. This isn’t something that’s entirely new – some places, such as Singapore Changi Airport, are already frequented by visitors who aren’t flying – but it’s something that’ll develop significantly over the coming years.

In summary, it is important that airports look to capitalise on AV technology – to look to drive efficiencies and open up new revenue streams.

This technology brings the potential to directly improve the experience passengers have when they travel, supporting the evolution of the airport from transport hub to a destination in its own right.