When airport and aviation experts gathered in Lagos, Nigeria, for the 59th ACI Africa Board and Committees Meetings, Regional Conference and Exhibition April 14-20, 2018, they shifted Africa’s focus to strategies to transform African airports into sustainable businesses.

Guided by the theme: “Business Transformation For Sustainable African Airports,” stakeholders sought to address several recurrent questions and challenges that beset most African airports. Nigeria’s President, His Excellency Muhammadu Buhari who spoke through the Secretary to the Federal Government (SFG), Mr. Boss Mustapha, emphasizes the need for sustainable developments in African airports, stating that the aviation industry plays a vital role in the country’s economy. 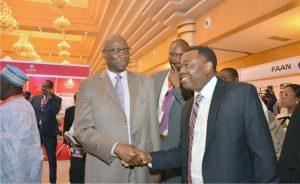 Importantly, African airports were reminded of the essence of expanding their non-aeronautical revenue sources. The President of ACI-Africa and Managing Director of the Federal Airports Authority of Nigeria (FAAN), Engr. Saleh Dunoma, says: “Airports have the potential to be generators of economic growth, job creators and facilitators of international trade and tourism.”

To ensure these roles and continue to reap the benefits, he says, airports must ensure sustainable development that includes the enhancement of non-aeronautical revenues as a critical component of an airport’s revenue stream and bottom line. According to him, with less than 20% of commercial revenue, airports in Africa must transform themselves from being not just public service providers but commercial enterprises that generate profits. 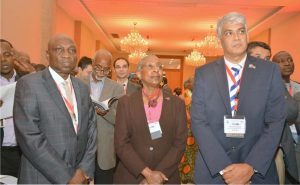 Africa’s airports sub-sector offers inherent benefits which most African airports are yet to explore. Essentially, African airports need to reposition to play an enabling role under the unfolding continental policy frameworks ushered in by the launch of the Single African Air Transport Market (SAATM) in January 2018 by the African Union in Addis Ababa, Ethiopia; and the African Continental Free Trade Area (AfCTA) launched by African Heads of States at their meeting in Kigali, Rwanda in March 2018. Air traffic is forecast to grow at roughly 3.8 per cent annually through 2032 in Africa; this requires continued development and modernization of Africa’s aviation infrastructure including the airports.

According to a report in IATA’s Aviation Benefit 2017, the African aviation market is probably the one with the most potential for growth. This is because of its emerging industrial sector and its potential in servicing a large and developing population. The report shows that economic activity of the continent is improving but is still catching up to other regions of the world. Air transport supports 6.8 million jobs and USD 72.5 billion in GDP in Africa, IATA states. 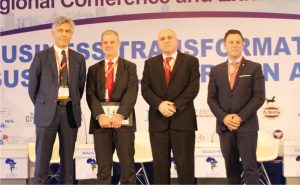 The aviation industry is a catalyst for sustainable social, economic and human development, while the airports specifically serve as veritable gateways to this development and prosperity.

Aviation facilitates connectivity, tourism and trade which in turn foster economic growth and new opportunities all over Africa today. Therefore, in considering its potentials and the immense contributions to Africa’s social and economic sectors, the airports can be described as a critical tool for growth, IATA also believes.

While some African airports like the O.R Tambo International Airports which handle over 20 million passengers yearly have been performing well, majority of the airports operators in Africa are faced with challenges ranging from inadequate airport infrastructure to lack of funds, investment, inability to achieve passenger satisfaction and so on, which has become a reason to review the airport models of operations to drive profitability. Many African airports still operate the traditional airport business which focuses on revenue from aeronautical sources that are not enough to meet airports’ needs. Many of these airports are state-owned, and often wait for government attention, in direct competition with other government responsibilities like roads, hospitals, schools, etc.

The experts at the conference in Lagos also underline the need to boost security in African airports, and also enhance industry partnerships and airport management systems. Mr. Ali Tounsi, Secretary General, ACI-Africa, wants African airports to improve on safety and quality of personnel. He also mentions that ACI-Africa launched a survey for its member airports in 2017 which had a result that further confirmed the shortcomings of African airports in the areas of security and other aspects crucial to the management and development of airports such as the safety, economy, and environmental management. The result shows that these challenges arise from the lack of financial resources and expertise.

L-R: Major stakeholders of the Nigerian Aviation industry and aviation experts from other parts of the world

While many African airports are yet to get certified, the International Civil Aviation Organization (ICAO) says only about 20 African countries have reached a 60% effective implementation of critical safety elements under ICAO’s Standard and Recommended Practices (SARPS) of ICAO, which is perhaps an indicator that many airports in these States are yet to measure up to needed safety standards.

Ergonomics and airport ambience are still a source of worry at many African airports where passengers still have to stand while waiting to board their flights or waiting to receive their loved ones because there are insufficient provisions for airports users’ comfort and convenience. Other challenges include poor toilet facilities, few and awkwardly located shops, high airport service charge, etc.

Ms. Angela Gittens, Director General of ACI-World, says the ACI is working alongside ICAO to ensure that airport infrastructure in Africa are developed; she calls on African airports and airlines to strive to transform their businesses. Dr. Bernard Aliu, ICAO Council President, reiterates that “ICAO has been working with ACI and other stakeholders to assist States in securing resources and capacities to develop and modernize their aviation infrastructure.” 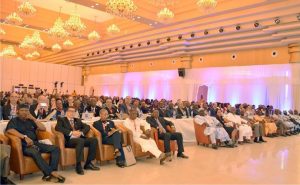 Cross-section of delegates at the conference

Overall, airports must be more customer-focused to achieve successful transformation. According to Mr. Andre Bergeron, a travel and retail airport commercial development consultant based in Canada, while airports are transforming to profitable businesses, customer-focused models enhanced by technology should equally be the priority of African airports.

On the aspect of security, Mr. Papadiery Sene, Deputy Director Teranga Security Airport, Senegal, says outsourcing airport security is another veritable way to achieving business transformation, as it helps in maintaining a sustained, dynamic, flexible and evolutive airport security system. The prescriptions have been made to transform African airports into profitable sustainable businesses.

But more importantly, where there is a will, there is always a way.