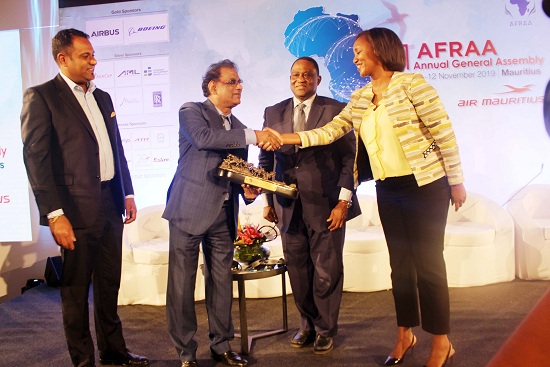 At the 51st Annual General Assembly of the African Airlines Association (AFRAA) held mid-November 2019 on the Indian Ocean Island of Mauritius, fresh indications emerged as to the new direction and development of the air transport industry in Africa. The efforts of African airlines under the aegis of AFRAA have in recent times become notably more impactful and raise increased hope for sustainability.

In fact, against this background, the Acting President of the Republic of Mauritius, Paramasivum Pillay Vyapoory, emphasizes the need to build cooperation and more efficient air interconnectivity for Africa and enable Africa play a more significant role in global air transport. He says Africa is a vast continent with resources yet to benefit majority of the populace. He notes that African leaders are working hard to change the fortunes of Africans.

He says Africa needs greater collaboration and air connectivity for effective integration of the continent, just as Africa’s economy continues to grow. He emphasizes the commitment of the Mauritian government to support Air Mauritius to achieve more efficient interconnectivity, charging AFRAA to push for greater interconnectivity and more integrated Africa. A lot needs to be done in Africa by local partners especially African airlines, taking cognizance of the commitment of political leaders like the Acting President of Mauritius and his counterparts to improve the operating environment in Africa. 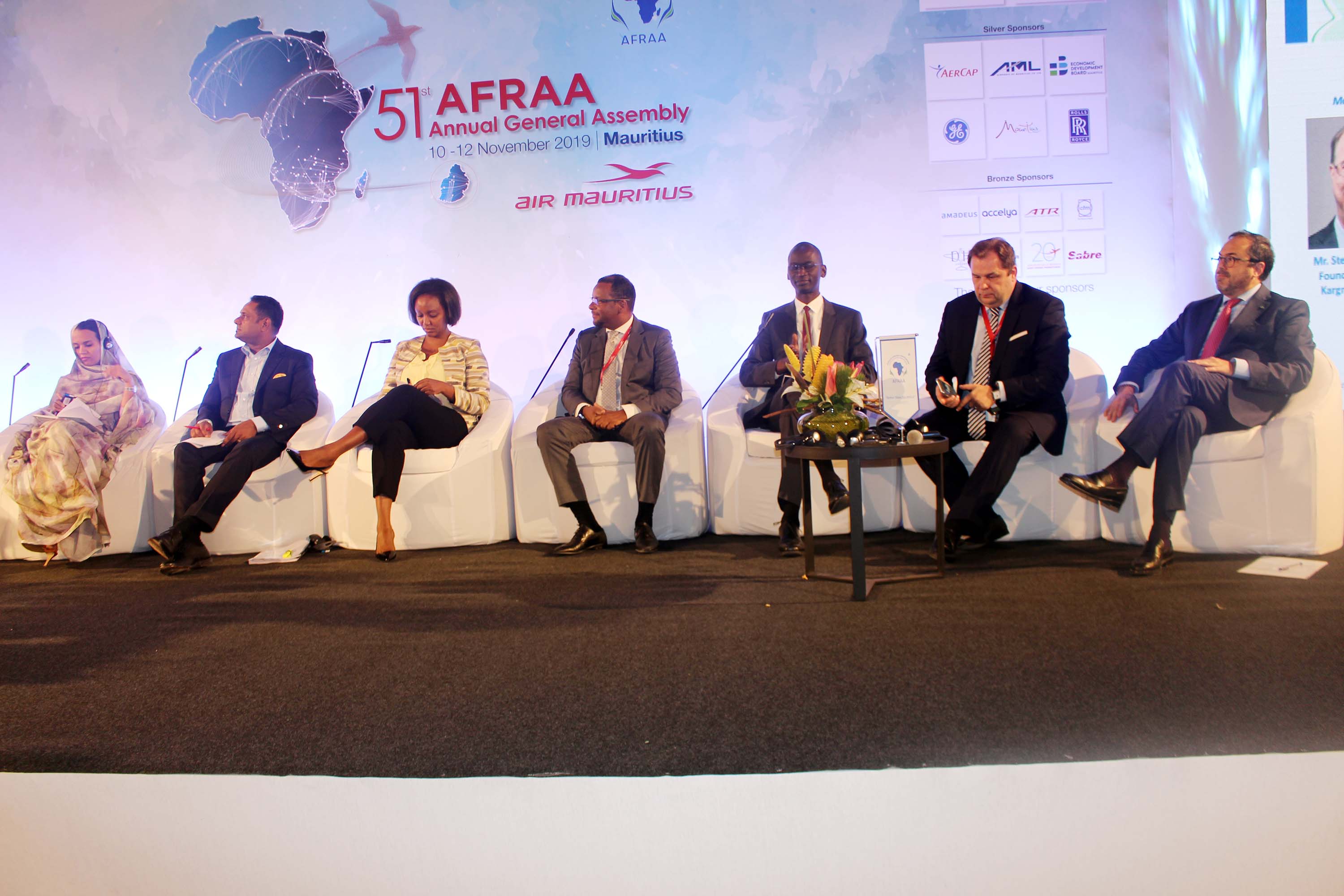 However, a crucial challenge to address beforehand is, in the view of the Director General and Managing Director of International Air Transport Association (IATA), Mr. Alexander de Juniac, the need for African airlines “to restore confidence for the industry” following the unfortunate crashes of the B737 Max aircraft belonging to Lion Air and Africa’s Ethiopian. He emphasizes that safety is a priority for airlines. The continent had no fatal jet accidents in 2016, 2017 and 2018. That is largely due to the coordinated efforts of all stakeholders with a focus on global standards, guided by the Abuja Declaration, he explains.

He wants more African States to implement ICAO Standard and Recommended Practices (SARPS) as he notes that “currently, only 26 states meet or exceed the threshold of 60% implementation and that is just not good enough.”

Mr. de Juniac stresses the need for all to support air transport development in Africa, stating that air transport has built one of Africa’s strongest economies with aviation as a central pillar.

“Across the African continent, the promise and potential of aviation is rich. Already it supports $55.8 billion in economic activity and 6.2 million jobs,” he adds. 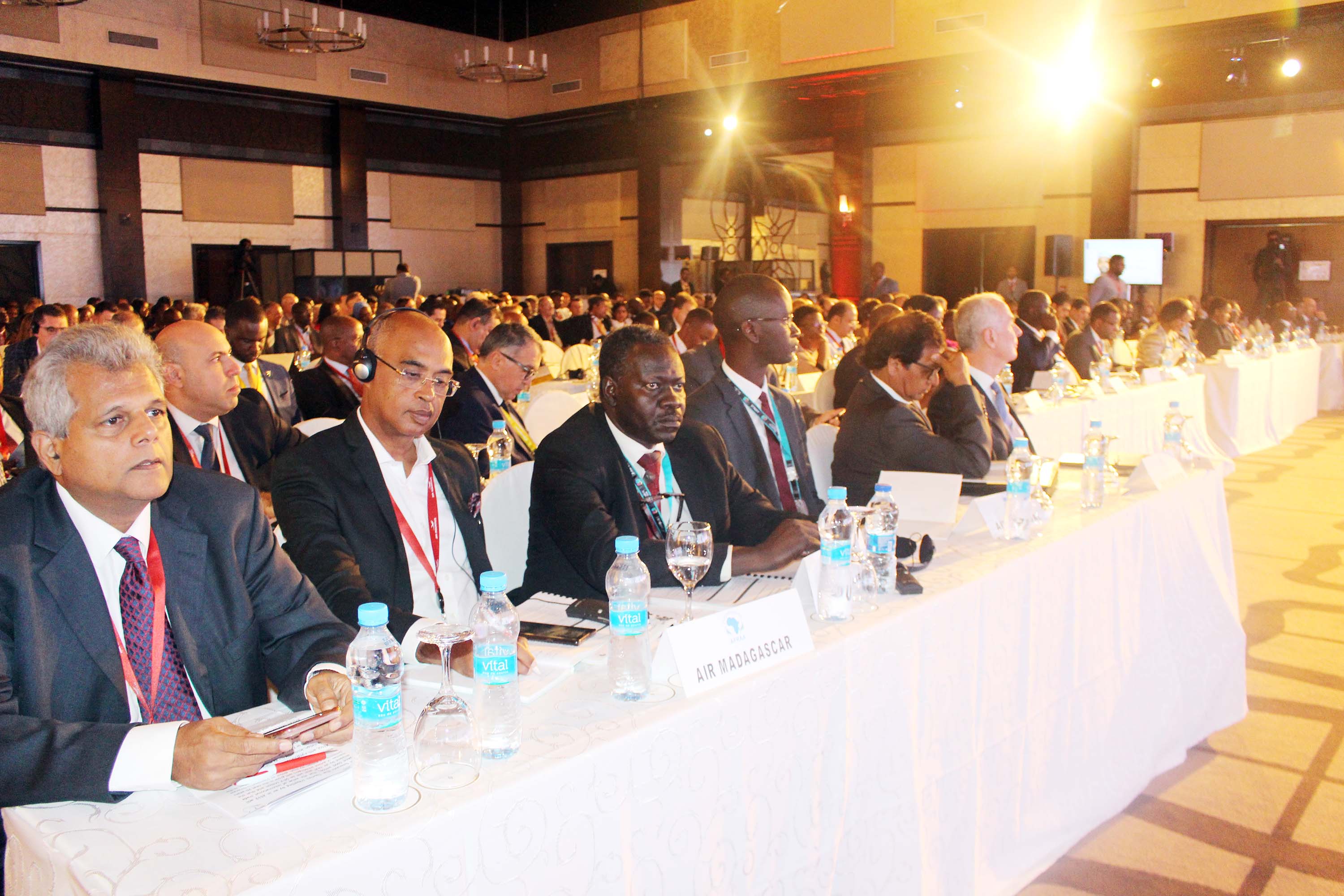 Cross-section of delegates at AFRAA AGA 51 in Mauritius

He says Africa doubles in air transport every 15years, and “we need be ready,” by way of improved safety security, capacity, market access, better skies, and perhaps most importantly, profitable African airlines.

Technology is the next game changer, he also posits, emphasizing that “at every step of passenger journey, time and processes on ground is essential,” as he deems it vital to simplify growth of airline business in Africa. Mr. de Juniac adds that Africa should pay attention to the need to reduce negative impact of aviation on the environment, even though the environment may not be Africa’s priority at the moment.

“We must make CORSIA as comprehensive as possible during the voluntary period. Burkina Faso, Botswana, Cameroon, Congo, Equatorial Guinea, Gabon, Ghana, Kenya, Namibia, Nigeria, Uganda and Zambia have all signed-up during this voluntary period. And we encourage all African states to join from day one,” he says.

High costs of operation contributes to African carriers losing $1.54 for every passenger they carry, explains de Juniac who states jet fuel costs are 35% higher than the global average, and user charges are excessive in Africa. These charges account for 11.4% of African airlines’ operating costs, which is double the industry average, he laments, adding that “there is a plethora of taxes and charges, some unique like Redevance fees, Hydrant fees, Railage fees, Royalty Fees and even Solidarity taxes.”

He calls on all partners to support aviation which facilitates $100 billion of trade annually, while noting that “each year some 157 million passengers travel to, from or within the continent.”

Mr. Eric Ntagengerwa, who represented Amani Abdu-Zeid, AU Commissioner for Energy & Infrastructure, at the AFRAA 51 AGA, says that opening boarders bring huge benefits to the continent, emphasizing the need to fully implement the Single African Air Transport Market (SAATM) launched by the AU in January 2018 and currently signed by 32 African States. For SAATM to work, he says, African airlines must participate actively and improve passenger experience, noting that the AU would review charges on airlines to further improve the operating environment in order to reduce cost of air travel in Africa. 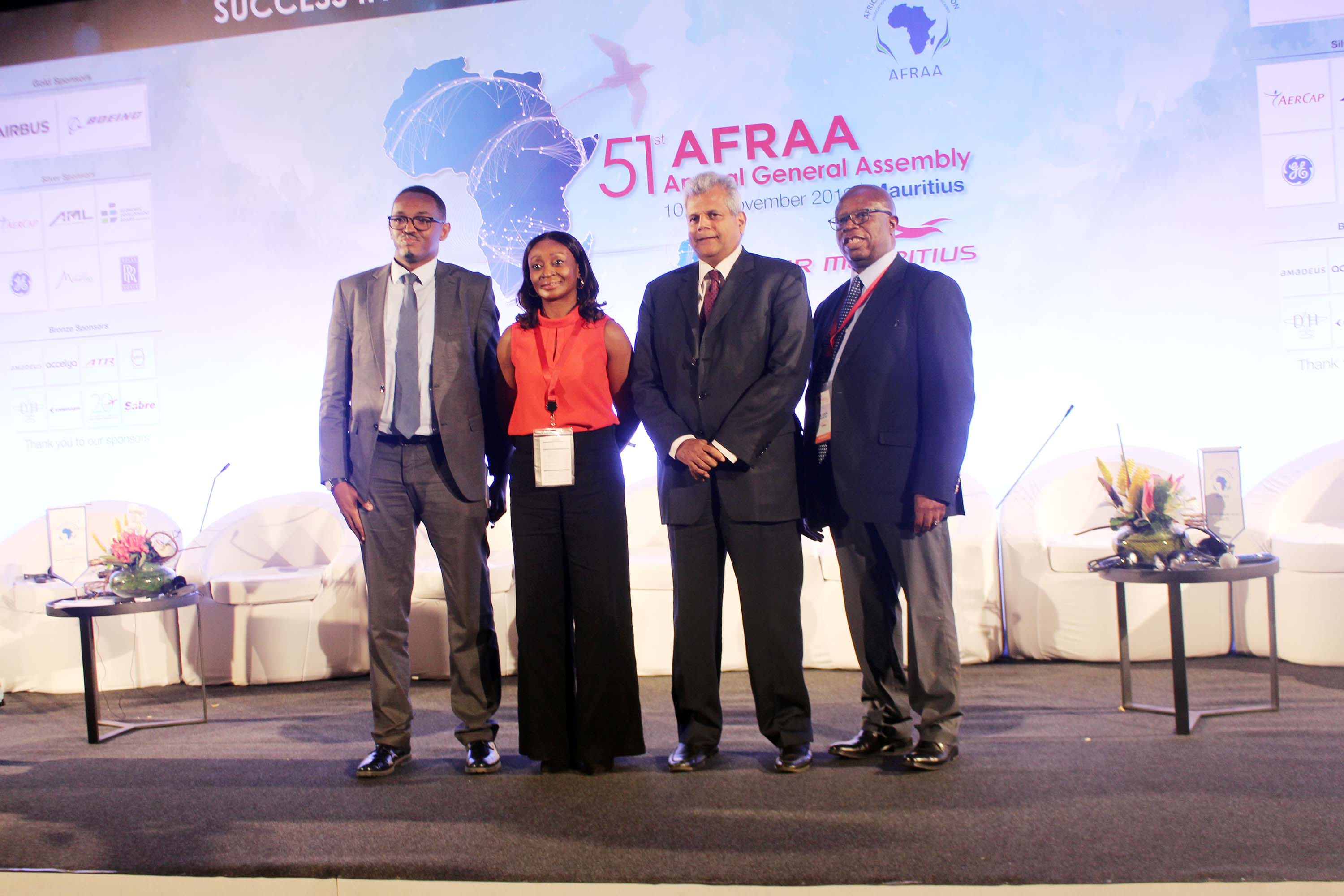 The Secretary General of AFRAA, Mr. Abderahman Berthe, says AFRAA is expanding benefits to African airlines through AFRAA joint schemes, as the association is also reviewing its policy to welcome even more African airlines as members. He calls for increased government support including release of blocked funds. The CEO of RwandAir, Mrs. Yvonne Makolo, in this regard, expresses worry that airlines have been compelled to charge passengers in dollars and cash to avoid the negative impact of blocked airlines funds.

The Future Of African Airlines

For airlines to step beyond many challenges they face, the Chief Executive Officer of Air Mauritius, Mr. Somas Appavou, believes an African airlines alliance would be relevant, as he emphasizes that African airlines should expand and establish more robust partnerships.

An interesting aspect of airlines’ value-addition is their enhancement of service in Africa. While Mr. Younouss Djibrine, Secretary General – Pan African Postal Union (PAPU), says improved connectivity is essential for Africa, he adds that the postal union is deepening partnership with African airlines connecting African destinations, as he says Agenda 2063 is a long-term vision for interconnectivity in Africa. Postal service and airlines relationship need be improved, he says, adding that now airlines have special access to data on postal operators, which creates efficiency. 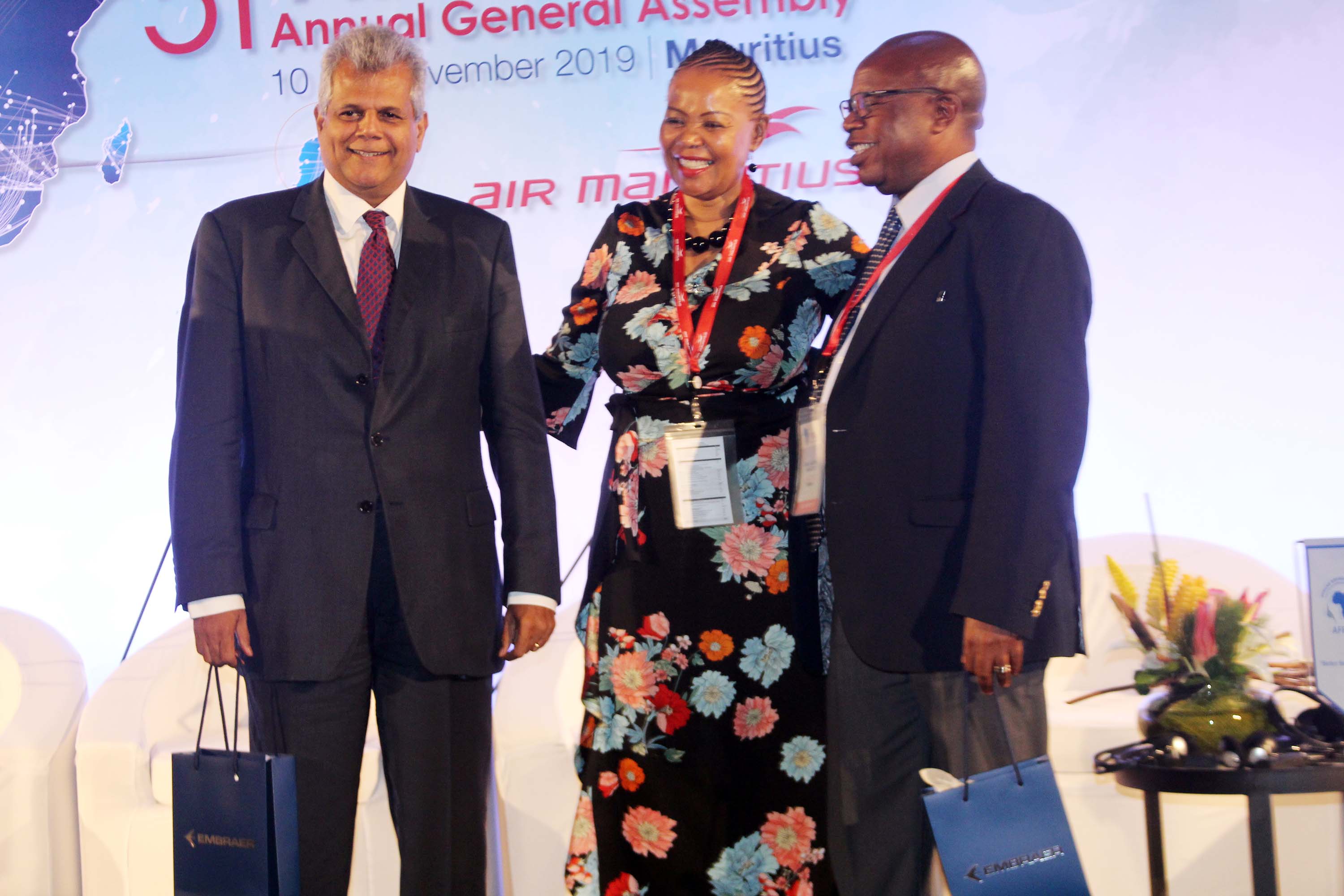 Mr. Vijay Poonoosamy, Director International & Public Affairs – QI Group, encourages African airlnes and all institutions to implement the SAATM, warning that African airlines must strive to secure their place in the airline market as air transport would continue to exist with or without African airlines.

Technological innovation and corresponding manpower development is seen as the cornerstone of African airlines’ sustainability and competitiveness over the next decades. 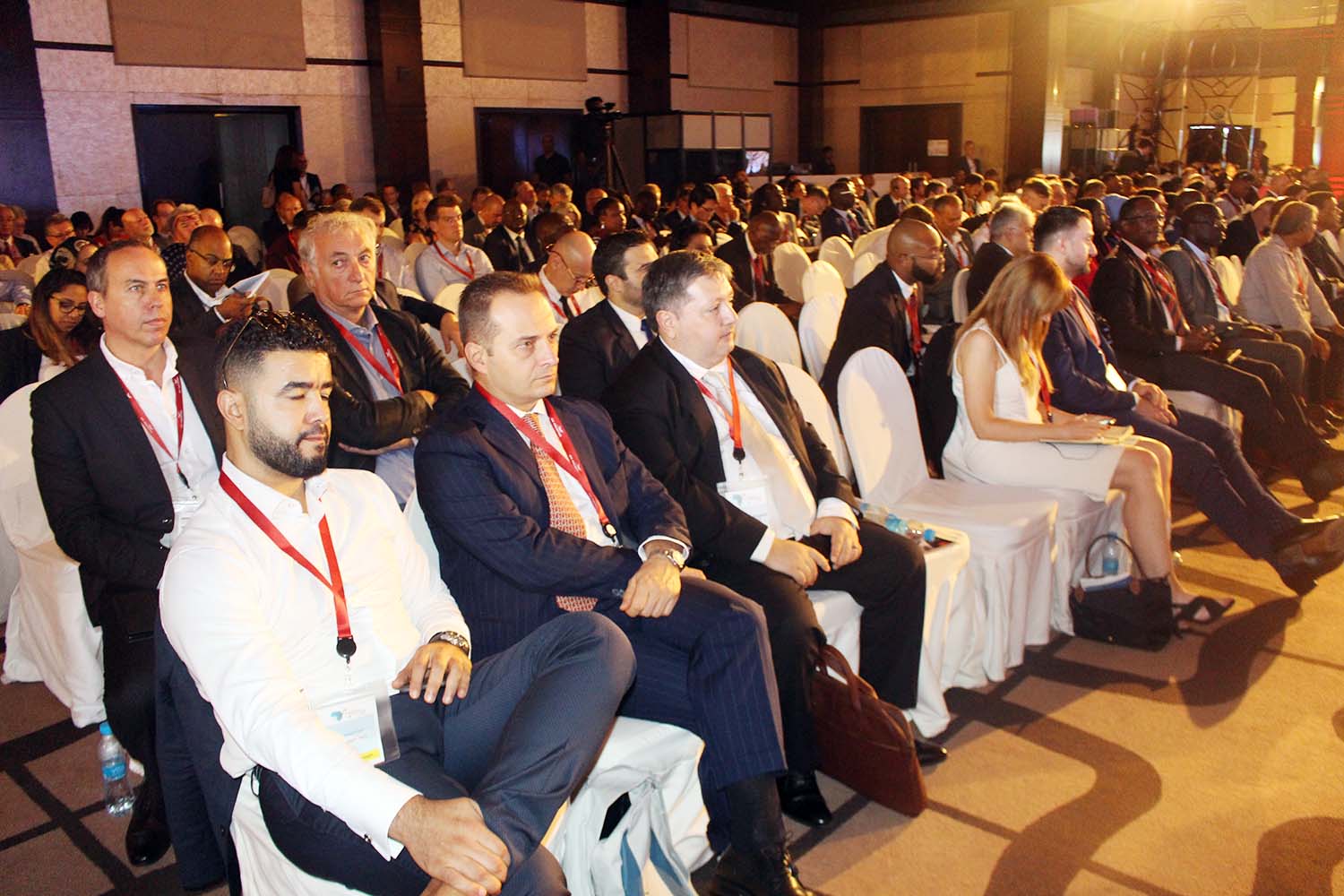 Cross-section of delegates at the AFRAA AGA 51 in Mauritius

The African Airlines Association (AFRAA) at its 51st Annual General Assembly (AGA) in Mauritius announced key officers for the association in 2020. Mr. Rui Carreira, Chief Executive Officer of TAAG Angola, is the President of the Association for 2020. In this capacity, Mr. Carreira and TAAG Angola will host the 52nd AGA in Angola from 22 – 24 November 2020, according to AFRAA.