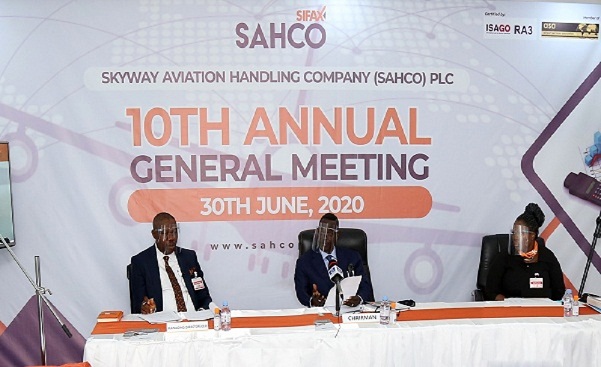 According to SAHCO, the AGM was conducted in accordance with the guidelines issued by the Corporate Affairs Commission (CAC) on the conduct of Annual General Meeting via proxies as part of the measures to mitigate the negative effect created by the current Coronavirus (Covid-19) pandemic.

SAHCO PLC declared a dividend of N223,340,700 at 16.5k (Sixteen and a half kobo) per share which is payable less with the appropriate withholding tax at the time of payment.

Dr. Taiwo Afolabi, C.E.O of SIFAX Group, noted: “You will recall that SAHCO became a publicly quoted company after its listing on the Nigerian Stock Exchange (NSE) in the last quarter of 2018, the listing, a natural progression in our post-privatization strategic growth plan, is also in furtherance of the vision to becoming the preferred ground handling company in the West African sub-region in terms of revenue, clientele base, quality of service, customer satisfaction, innovation and return on investment.”

“Essentially, three African carriers made their entrances into the Nigeria market TAAG Angola, Cabo Verde Airlines and Air Senegal. However, Air Namibia suspended their flights to Lagos over unresolved diplomatic issues.” He says the company is ready to attract new Airlines as we expect new startup airlines before the year ends which are; NG Eagle and Green Africa,” Agboarumi stated.