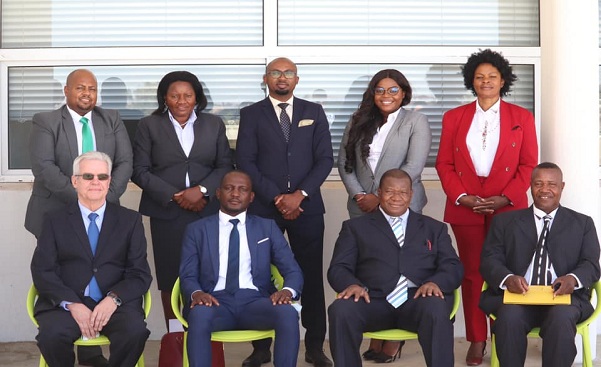 The Minister of Works and  Transport  (MWT), John Mutorwa, has inaugurated the new Namibia Civil Aviation Authority Board (NCAA) at the NCAA head office in Windhoek.

According to NCAA, Mr. Mutorwa further appointed Bethuel T. Mujetenga as Chairperson and Kadiva Hamutumwa as Vice-Chairperson, while emphasizing that the recruitment process of the new board was done in an open and transparent manner.

The Minister revealed  that a committee was set up consisting of officials from the Ministry of Public Enterprises (MPE), Works and Transport and some private sector organizations which handled the technical aspects of the recruitment process.

Veikko Nekundi, Deputy Minister of MWT reminds the new board that they are accountable to the ministry “although the body is autonomous, there are limits”.

Mr. Mutorwa says he is confident that the new board is up to the task, judging from their respective Curriculum Vitae, Academic Competencies and skill profiles.

Bethuel Mujetenga, new chairperson and member of the NCAA board, states: “I am humbled by my designation as the chairperson and the board is committed to fulfilling the enormous responsibilities during our term of office.”

Mr. Mujetenga stressed that he will be able to exercise this responsibility by working with MPE, MWT and members of the board and the staff of the NCAA.

According to Mujetenga, the new board will ensure that Namibia and its airlines Airports Company and the civil aviation industry at large is not on the list of countries with serious safety concerns (SSC).