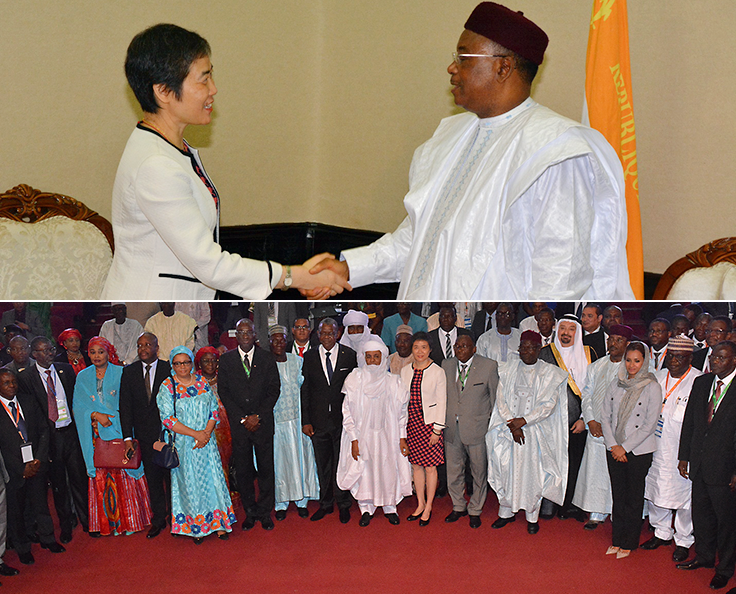 “Aviation is recognized as crucial to the achievement of the United Nations Agenda 2030 Sustainable Development Goals. It supports almost seven million jobs and generates more than 72 billion dollars in Gross Domestic Product (GDP) in Africa,” the ICAO Secretary General declared during the AFI week in Niamey, the capital of Niger Republic.

Dr. Liu set the tone for progress in her opening remarks at the AFI Week Grand Opening ceremony, stressing that air connectivity is a unique and indispensable catalyst for socio-economic growth that links remote areas to cities, cities with the world, and goods and services with the global market place.

Highlighting recent landmark achievements towards amplifying these contributions, Dr. Liu applauded the official launch of the Single African Air Transport Market earlier this year, which will offer the opportunity to unlock increased connectivity and the value it delivers, as well as significant progress on compliance with ICAO standards and recommended practices (SARPs), notably through the implementation of the UN aviation agency’s global plans and AFI Regional Plans.

“The number of AFI States with significant safety concerns (SSCs) has been reduced to two, compared to the four we had itemized in 2016” she underscored. While recognizing this remarkable progress, Dr. Liu  highlighted that “the average effective implementation (EI) rate in the AFI Region stands at 52%, which is lower than the global average of 66.5% and below ICAO’s current minimum target of 60%.” She encouraged AFI States to continue to work together to strengthen and make use of cooperative mechanisms such as Regional Safety Oversight Organizations (RSOOs), given the significant challenges that remain ahead.

At the same time, Dr. Liu updated the AFI States on the UN High-level Conference of Heads of Counter-Terrorism Agencies held at the end of June where it was recognized that aviation remains a key target for terrorists. Aviation security, notably in the context of ICAO’s Global Aviation Security Plan (GASeP), can thus play a very critical role in limiting terrorist mobility and threats.

Regarding the need for African States to increase capacity in order to safely and efficiently manage forecast growth in flights and passengers, Dr. Liu noted that the adoption of the Declaration and Framework for a Plan of Action for Development of Aviation Infrastructure in Africa at last year’s third ICAO World Aviation Forum (IWAF/3) provided significant momentum toward related progress.

“This Declaration has since been instrumental in helping AFI Member States to ensure the inclusion of more well-defined aviation projects in the 2020-2030 cycle of the Programme for Infrastructure Development in Africa’s (PIDA’s) Priority Action Plan,” she said, adding that ICAO will continue to provide technical expertise and support the implementation of the action plan in close cooperation with the African Union (AU) Commission, the Planning and Coordination Agency of the New Partnership for Africa’s Development (NEPAD), the African Civil Aviation Commission (AFCAC), and the African Development Bank (AfDB).

Acknowledging that the progress achieved to date has been enabled by the tremendous cooperation among ICAO Member States, the generosity of donor States, and the crucial participation of a wide variety of industry and intergovernmental stakeholders, the Secretary General confirmed that “I am quite positive that with these concerted and aligned efforts, the African continent will be able to establish the quality aviation infrastructure which is so urgently needed today to support the operationalization of the Single African Air Transport Market, and ultimately the successful realization of the African Union’s Agenda 2063.”

The AFI Aviation Week setting also provided ICAO with an opportunity to congratulate representatives of several States present, for their improved level of compliance with ICAO SARPs through increased levels of Effective Implementation, and resolution of Significant Safety and Security Concerns. The occasion was also used to release the Fourth Edition of the Annual Safety Report of the AFI Regional Aviation Safety Group (RASG-AFI).