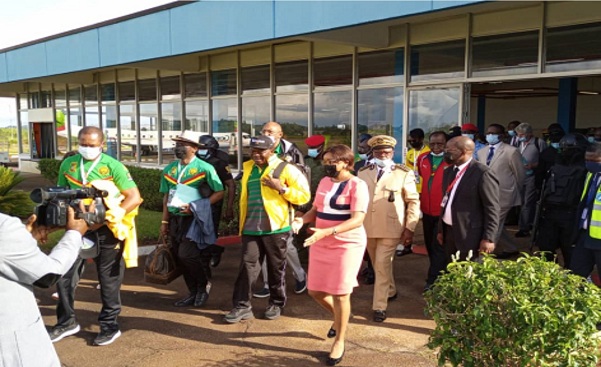 Mr. Ferdinand Ngoh, Minister of State and Secretary General of the Presidency of the Republic of Cameroon, says he is satisfied over the state of infrastructure at the country’s airports.

Mr. Ngoh recently toured the Bafoussam Airport ahead of the 2021 Africa Cup of Nations, leading a strong delegation made up of the Minister of Sports, former indomitable lions, various actors and officials of Cameroonian and foreign football, national and international media, to the airport as part of a nationwide tour to inspect the infrastructure dedicated to the CAN Total Energies 2021.

“In terms of bringing the airport up to standard, we have done a good job in fixing pothole and acquiring navigation aid equipment (DVOR/DME). This airport has been operational since 2016, and is capable of receiving on-demand and scheduled flights. For the moment, only the regular airline Camair-co serves this airport with 3 flights per week,” Mr. Ngoh adds.

CCAA says that there is a public concourse, a check-in hall, an immigration and security checkpoint, commercial areas, a boarding hall, a VIP lounge, a baggage reclaim area with carousel, offices for the airline, tourism, health, a restaurant and a car park for passenger handling.